Nine members of ArchSoc took part in an early-morning outing to the western section of The Wilds in Killarney. After worrying for most of the week about the possibility of rain, we were delighted to be greeted by a perfect summer highveld morning.

At the car park of The Wilds, we met our knowledgeable tour guide Sarah Barret, who operates Joburg 360 Tours. 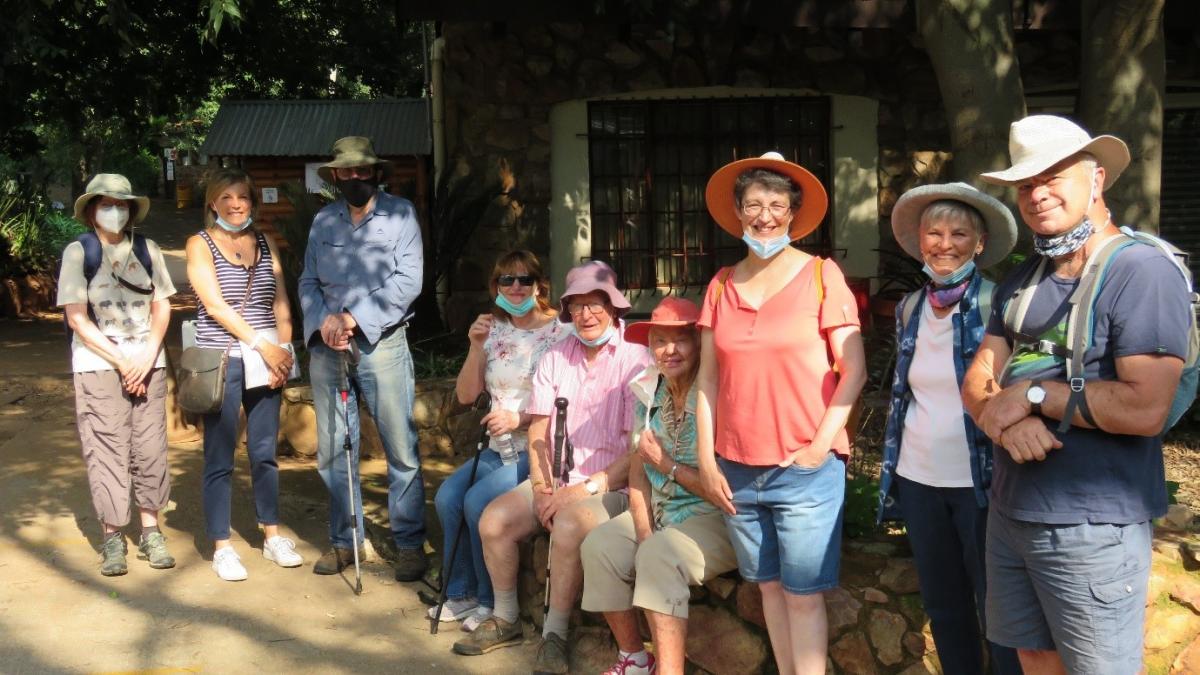 The Wilds, comprising 18 hectares, was donated to the Johannesburg City Council by the Houghton Estate Township Co. in 1924. The area was landscaped with indigenous flora in 1936 as part of the Johannesburg Empire Exhibition, to celebrate the City’s 50-year Jubilee. In 1950 attractive water features, comprising ponds and waterfalls fed by a small circulating stream, were added. Today the water features are meant to be supplied with excess water pumped from the nearby Gautrain tunnel, but maintenance problems meant that we were deprived of the sight and sound of a stream gurgling down the ridge.  The City dedicated The Wilds to the memory of Jan Smuts following his death in 1950, and in 1981 the area was declared a National Monument.

Many of our members may fondly recall the days when The Wilds was a wild-flower park popular with weekend visitors, before it became a notorious haven for muggers. This outing was therefore an opportunity to experience at first-hand how a dilapidated and overgrown park had been rejuvenated into a safe, well-maintained, and popular city green space. 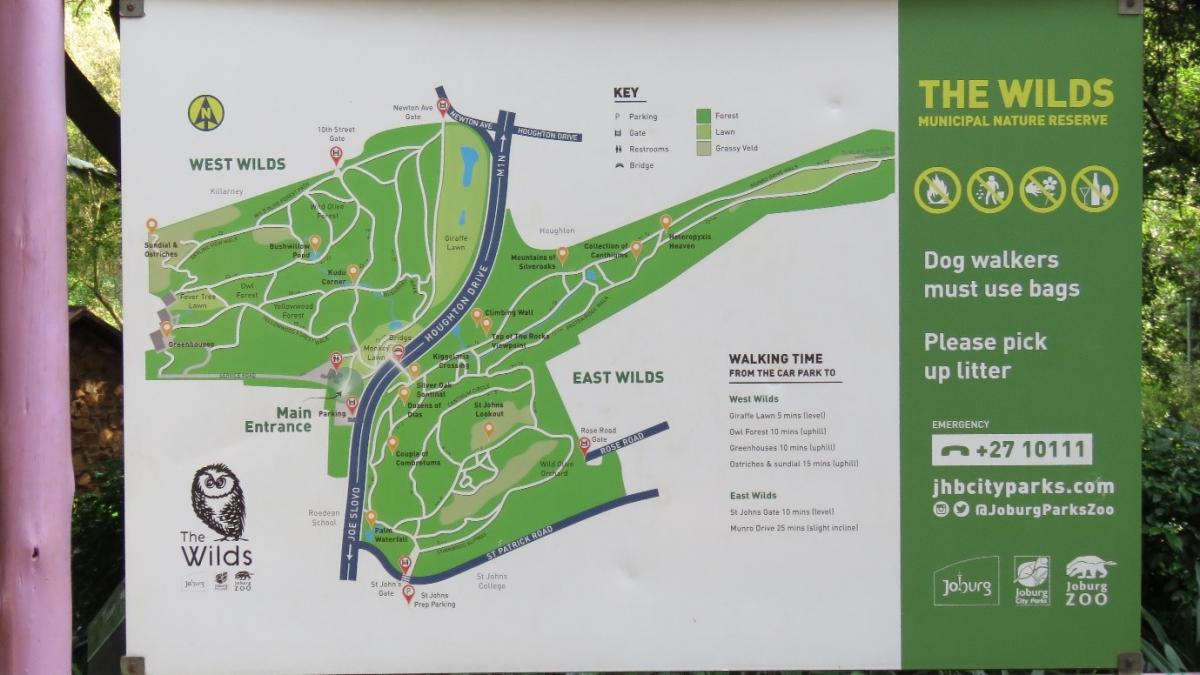 Map of The Wilds placed at the parking lot. ArchSoc only visited the West Wilds. This park is divided by Houghton Drive, but can be crossed by an elegant pedestrian bridge. (Photo SJ de Klerk)

While walking from the car park to the Giraffe Lawn we passed a pole-mounted Pick a Book Box, from which members of the public may remove free books provided they donate books to replace them.

Though The Wilds is located in the middle of Johannesburg, the area is inhabited by various small animals, such as the African Civet, Slender Mongoose, Southern African Hedgehog, Eastern Rock Elephant Shrew, and Vlei Rat. This we learnt from an informative sign. Another sign detailed the various flora to be found at The Wilds, including clivia, agapanthus, wild iris, wild garlic, strelitzia, vygies and Cape proteas. In addition, trees such as Yellowwood (Podocarpus latifolius), Transvaal Milkplum (Englerophytum magaliesmontanum) and Rock Elder (Afrocanthium mundianum) are present.

When we arrived at the Giraffe Lawn, Sarah Barrett explained how artist James Delaney had taken the initiative in rejuvenating The Wilds. In 2014, Delaney, an artist who lived in Killarney and worked from a studio at the Victoria Yards in Lorentzville,  was keen to walk his dog in the nearby Wilds, despite being repeatedly cautioned by neighbours that it was unsafe to do so. Persevering, he discovered two elderly City gardeners mowing the lawns at the bottom of the park, but the footpaths that wound up the ridge remained unkempt and overgrown. With assistance from neighbours, he began trimming, clearing, and removing undergrowth. They soon realised what a jewel the park could be turned into.

News of the ongoing rejuvenation of The Wilds slowly spread, and gradually the first curious and intrigued visitors began to arrive. Realising that many visitors remained too nervous to visit The Wilds, Delaney decided that attractions other than flowers and occasional small animals were required. He came up with an innovative plan to place steel sculptures of various animals around the park. There are now about 100 brightly coloured steel sculptures of animals spread through it. 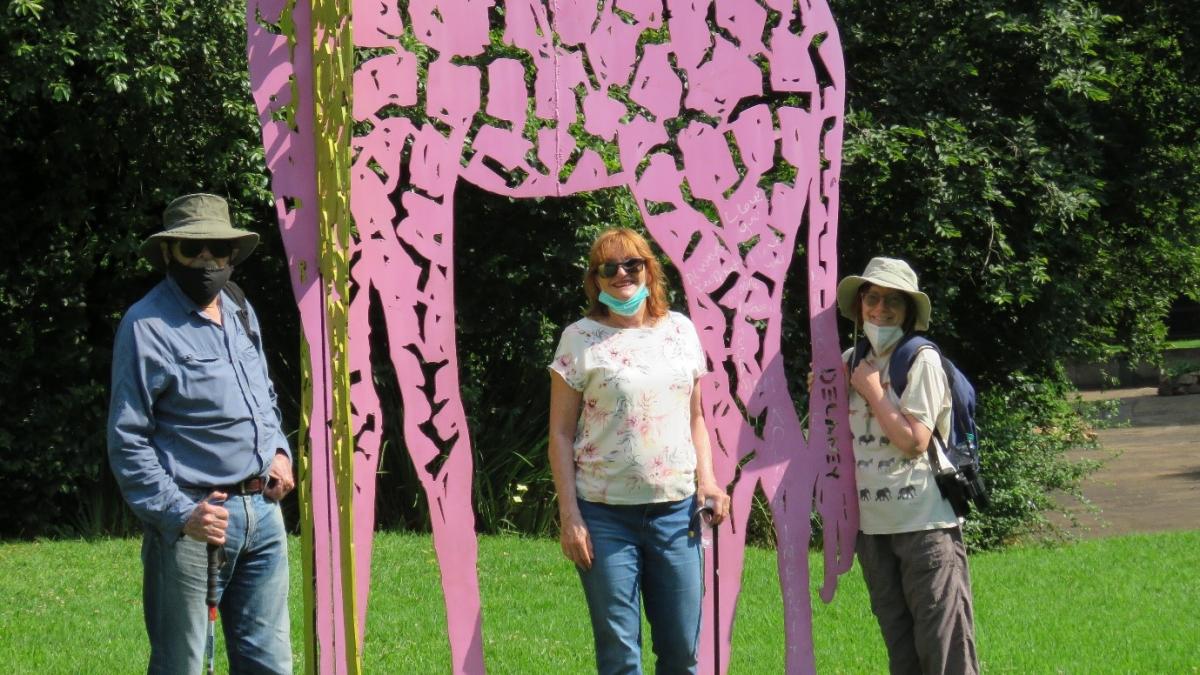 Three of our masked and suspicious-looking members posing against the Giraffe sculpture. (Photo SJ de Klerk)

From the Giraffe Lawn we slowly ascended the ridge via the neatly cobbled pathways that wind up through the trees and bush. According to one estimate, a total of six kilometres of these pathways were laid out across the two sections of The Wilds when the area was first developed as a park.

Spectacular views towards the south appeared through the trees as we gained elevation. We saw steel sculptures of various animals set in the vegetation, and also models of ladybirds and other insects on rocks next to the path. Our guide kept us both amused and intrigued with questions such as, what does one call a group of ladybirds? Apparently, a Loveliness of Ladybirds! Member who supplied the correct answers to her questions were rewarded with a sweet, which came in handy to replenish declining sugar levels as we climbed the ridge.

At one lookout spot we encountered a sculpture of a majestic Kudu bull. Here our guide tasked us with spotting the Kudu cow. After several false calls, we spotted her standing in a clearing in the distance across the motorway in the East Wilds. 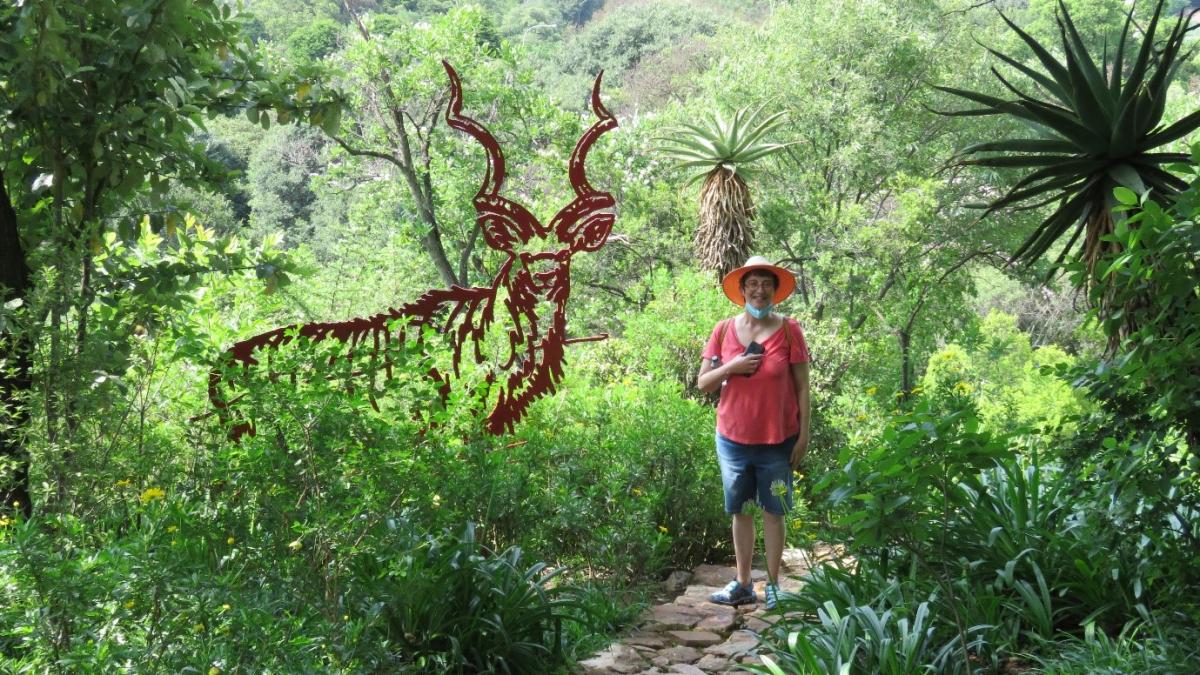 We then passed the Owl Forest where Delaney had placed 67 sculptures of Wild Owls in honour of Mandela Day in 2017. This is apparently a favourite spot for young schoolchildren who delight in counting the number of owls on view.

At the Fever Tree Lawn high up against the ridge, those who still had energy walked a bit further to the top to view an attractive sandstone sundial. 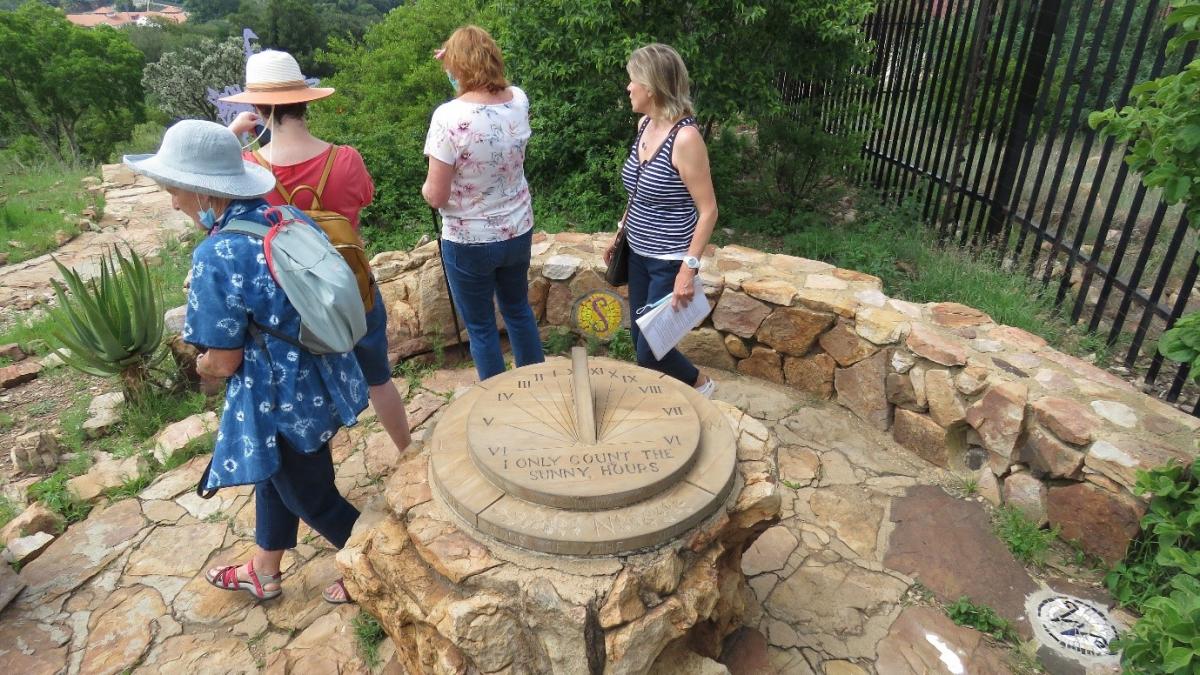 Sundial on top of the ridge. (Photo SJ de Klerk)

Once again, our guide shared an interesting bit of information. Did we know every sundial has an inscription on it? This one reads, ‘I only count the sunny hours.’

A concern voiced by a member of the group about whether it was safe to wander hereabouts met with a reassuring response from a passing young lady, who told us that she regularly walked her dog in the park.

After our somewhat tiring climb, we had an easy walk down a tarred access road to enjoy our flasks of tea and coffee back at the car park.

Although The Wilds is now considered safe to visit, we caution members of ArchSoc who do so to take precautions by not wearing or carrying any valuables that could attract unwanted attention.

Thank you to everyone who joined us on this delightful morning outing.