The Wonderboom Nature Reserve is situated in the northern part of Tshwane and straddles the Magaliesberg. This 200-hectare reserve is famous for its magnificent specimen of Ficus salicifolia, a wild fig tree called the ‘Wonderboom’.

The fig tree is reputedly older than 1 000 years, and legend has it that it has grown to be this big because a local chieftain lies buried beneath its roots. It is recorded that the tree was once big enough to shade 1 000 people at a time or 22 ox wagons with 20 oxen in front of each. Today it is much smaller, possibly because of the devastating fire in 1870 that was started by a hunting party or due to a parasitic infestation, which put the tree under quarantine for 20 years. Over the years, the branches have grown longer, hanging lower until they touched the ground, where they rooted and produced a circle of daughter trees. There are now three circles of daughter trees surrounding the original tree. 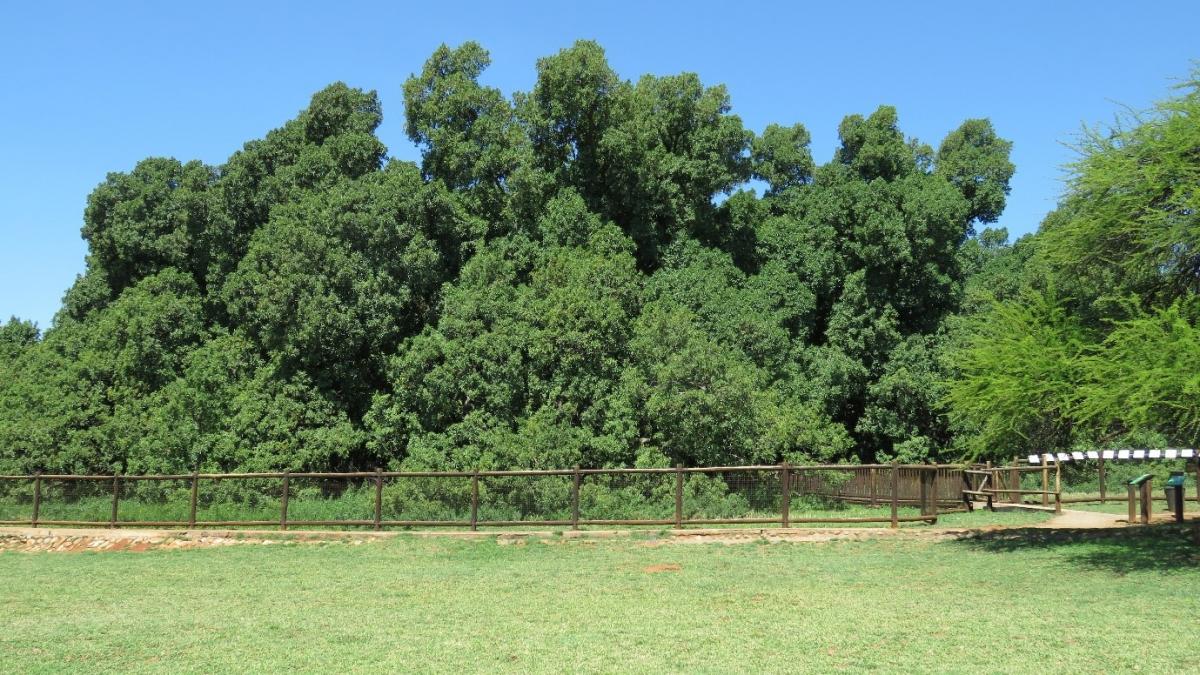 The 'Wonderboom’ surrounded by its protective fence.

Professor Anton van Vollenhoven, our enthusiastic guide met us at the parking lot adjacent to the ‘Wonderboom’. Once we had divided ourselves into a smaller number of vehicles, we drove a short distance to a protected gully along the southern top of the ridge to visit an Earlier Stone Age site (Late Acheulian) excavated by the late Revil Mason during the 1960’s, which he described as ‘one of the richest Stone Age localities known’. This site is estimated to have been in use from 800 000 to 500 000 years ago. At present Marlize Lombard, Matt Lotter and Matt Caruana from UJ, are excavating here. Amongst others, they are investigating some of the tool manufacturing preferences of the hominins who used the site during this period. 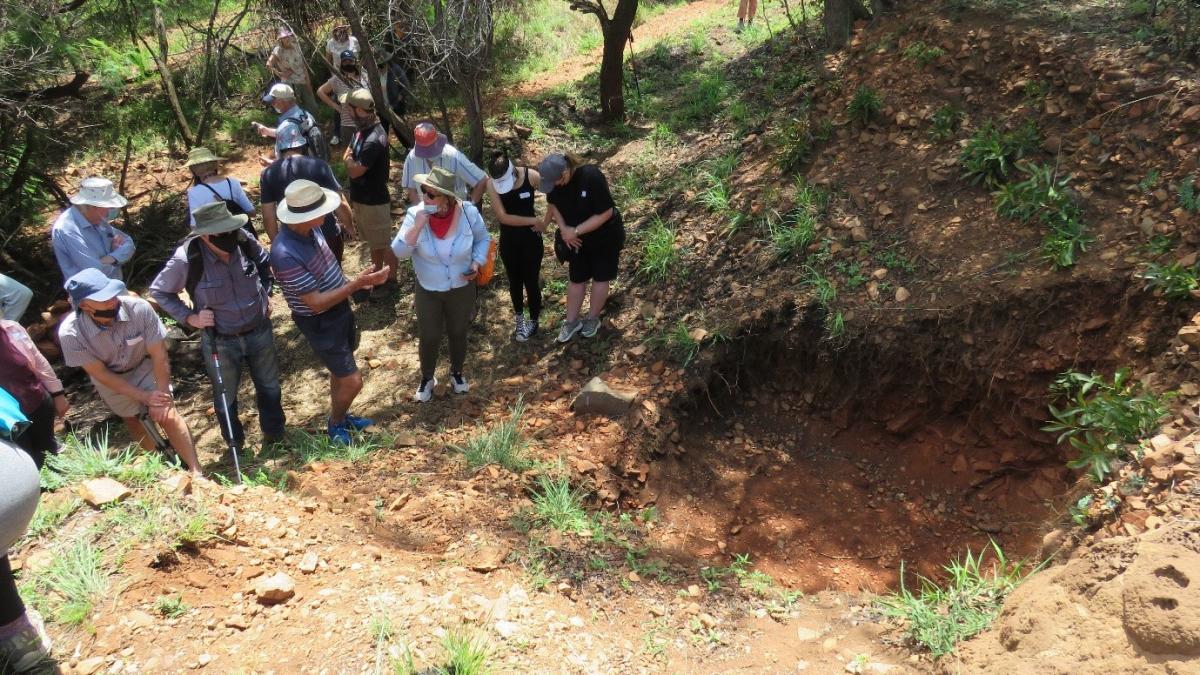 Excavation of Revil Mason dating from the 1960’s.

From here we took a short drive to the west to visit a Late Iron Age site, situated virtually next to the Wonderboom Fort, along the northern edge of the ridge.

Unfortunately, this site has not yet been excavated and high grass because of the recent rains prevented us from observing much, other than the remains of some stone walls which formed part of some early homesteads. It is thought that these stone walls dated from the early 1800s. The early inhabitants were Tswana, but the area and structures were subsequently taken over by the Ndebele under Mzilikazi.

Our next port of call was Fort Wonderboompoort.  Following the abortive attempt by the Jameson Raid to overthrow the Zuid-Afrikaansche Republiek (ZAR) during the last days of 1895, the Boer government realised they were vulnerable to foreign backed military intervention. When the Jameson Raiders surrendered at Doornkop, south-west of Johannesburg, a captured trunk containing incriminating documents by Captain Bobby White indicated the Raiders and the Reform Committee contemplated seizing the poorly guarded ZAR artillery depot in Pretoria. The ZAR government therefore began to rearm in earnest, realising a war with Great Britain appeared imminent.

Part of the rearming process involved the construction of eight forts around Pretoria, but of which only four were ever built. 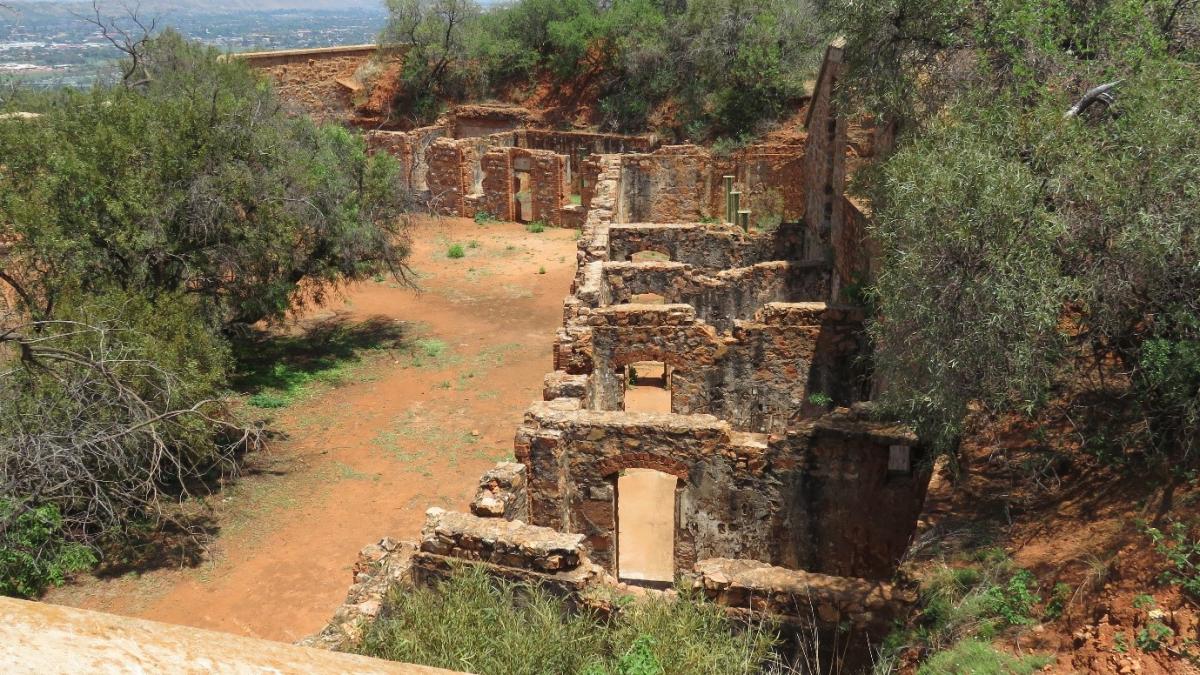 View of Fort Wonderboompoort from above.

The German designed forts all belonged to the pentagonal redoubt type. Placing revolving guns on the ramparts, made provision for all-round defence.  By building embrasures into the rear walls and providing the ramparts with firing-steps, it was possible to use infantry in their defence. 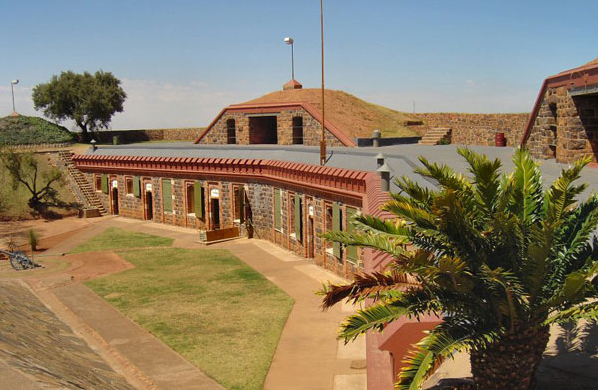 A similar view of the restored Fort Klapperkop. Cannons and ammunition for immediate use would have been stored in the casemates on top.

In contrast, Fort Daspoortrand was designed by two Frenchmen L. Grunberg and Sam Léon representing the firm of Schneider & Co.

No shots were ever fired in anger from any of these, as the Boer commandos evacuated Pretoria and the surrounding forts when the British forces approached, retreating along the Delagoa Bay railway line.

Forts Klapperkop and Schanskop better survived the ravages of time as they were used as ammunition storage depots during the Second World War and subsequently restored. The question why Forts Daspoortrand and Wonderboompoort are so dilapidated remains unanswered. Some believe the Government ordered their destruction during the Second World War, to prevent the right wing Ossewa Brandwag movement from using them for political and/or military purposes.

Having completed our visit to this historic fort we retreated to the parking lot below where we enjoyed a convivial picnic lunch under a large and shady Marula tree (Sclerocarya birrea) next to the ‘Wonderboom’. If the length of the lunch is any indication, a good time was enjoyed by all.