Women’s quotidian farm labour and the construction of the  Khutwaneng farmscape in Bokoni, South Africa

‘Taskscapes’. This was the word that Professor Schoeman gave us to describe the built environment of Khutwaneng and other sites in what archaeologists call the Bokoni region in Mpumalanga. The word aptly captures the nature of the world of dense stone-built terraces and settlements that stretches 150 kilometres along the escarpment and its foothills from Carolina in the south to beyond Mashishing (formerly Lydenburg) in the north. 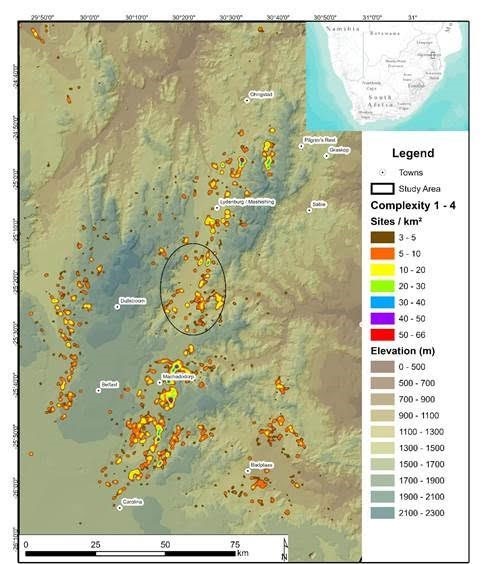 Map showing the position of Khutwaneng. (Map made by Tobias Coetzee)

Professor Schoeman, who is the Archaeology Academic Programme Coordinator at Wits, was the guest speaker at the Northern Branch’s AGM. She is one of a group of archaeologists and historians who have been working for some years on sites in Bokoni that date to the period from the 1500s to the early 1800s.

Khutwaneng is located in the Badfontein area, not far from Verlorenkloof, which is well known to members of the Archaeology Society. It was established as an independent settlement in the 1600s, one of a large number of similar villages clustered along the wellwatered escarpment. Here African farmers developed a form of intensive agriculture that was unique in southern Africa, but similar to ‘islands’ of terraced agriculture in other parts of Africa.

A LIDAR image of part of Bokoni showing settlements, terracing and roadways

Professor Schoeman explained how archaeologists have used LIDAR technology to assist them in mapping the features of settlements in Bokoni. LIDAR (Light Detection and Ranging) is a sensing method that uses pulses of laser beams to detect features on the surface of the earth. One of its great advantages for archaeologists is that it can penetrate screens of vegetation to reveal features that are often invisible in ordinary aerial photographs. The results have helped to establish the extent and density of the ribbon of settlement in Bokoni.

It became clear early on to researchers in Bokoni that farming settlements of this size could not have been supported by the so-called ‘subsistence’ agriculture that western scholars used to see as typical of African farming systems. This was the entry-point for researchers in Bokoni to make close investigations of the specialised farming that was developed on stone terraces and the soil they protected, painstakingly built up over years, stone by stone, scoop by scoop, by the labour of women, with perhaps some input from men. Construction wasn’t the end of the story. Professor Schoeman described how the soil had to be tended to maintain its fertility, with the inhabitants throwing their domestic rubbish and ash from their fires onto the terraces and digging it in to enrich the soil. This enabled them to produce a surplus of grain – sorghum and millet, and possibly maize in the eighteenth century – to trade to homesteads in other regions round about, including drier areas to the north. 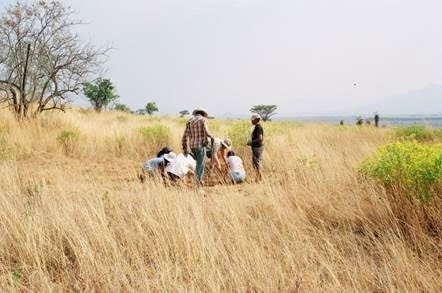 Archaeologists at work on a feature at a Bokoni site

Investment of large amounts family labour over prolonged periods in building and tending the terraces tied people to particular locations more closely than was the case in more extensive forms of farming. It also made the politics of safeguarding rights of access to land particularly important. As in other African societies, land would initially have been allocated to families by the local ruler, but in Bokoni families would have developed particularly strong rights to the areas of terracing that they built up through generations.

If people were tied to the land in this way, it does not mean that individuals were permanently stuck in one place. As in other African societies, families were always busy building and curating the networks of connections with others that they needed to maintain their homesteads and to keep up status and prestige. They relied on other families to provide extra labour when needed; to provide marriage connections; and to assist with community protection. People were constantly passing to and fro along the narrow roadways that they built up between settlements to channel livestock and to connect communities with one another.

All this took Professor Schoeman’s audience a long way from the common stereotype of African farming as subsistence agriculture. As other archaeologists are also showing us, farming practices varied widely across the landscape according to local conditions and local circumstance.

For more on Bokoni, see the beautifully produced book by Peter Delius, Tim Maggs and Alex

Report by John Wright, with acknowledgements to Alex Schoeman.

Map made by Tobias Coetzee.

Please note that this talk was also advertised under the title: