The outing attracted thirty-five people, with some hailing from as far away as Cullinan and Potchefstroom.

We met at the Witkop blockhouse on the R59 road from Johannesburg to Vereeniging. The

Northern Branch’s chairperson SJ de Klerk gave a quick overview of the Anglo-Boer War of 1899-1902 and the widespread use of both masonry and corrugated iron blockhouses by the Imperial forces to restrict the mobility of the mounted Boer commandos. 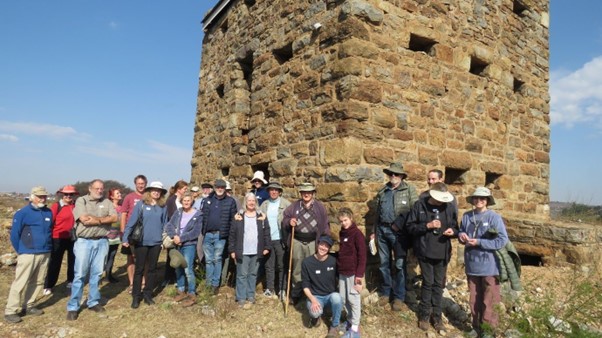 At the Witkop masonry blockhouse

Once the conventional phase of the war had ended with the defeat of the Transvaal Boer army at the battle of Dalmanutha in August 1900, the guerrilla war in both the Transvaal and the Orange Free State Republics began in earnest. The Imperial forces urgently needed to find a way of countering the hit-and-run tactics used by the fast-moving Boer commandos, and their frequent sabotaging of railway lines. Accordingly, Brigadier Elliot Wood (RE) designed various types of masonry blockhouses to protect vulnerable train bridges and culverts. Though building them was expensive and time-consuming, 441 of these masonry blockhouses were eventually erected along railway lines in the hinterland, and at towns such as Harrismith, Aliwal North, Krugersdorp, Wellington, and many others.

Some forty examples in various states of disrepair, like the one above at Witkop, have survived the ravages of time and can still be seen at Beaufort West, Leeu Gamka, Modder River, and elsewhere.

At the same time, Major Spring Rice (RE), stationed at Middelburg, experimented with building corrugated iron blockhouses. When he took delivery of a corrugated iron rolling machine for manufacturing water tanks, the idea occurred to him of making a circular blockhouse consisting of concentric inner and outer shells of corrugated iron, with the space in between filled with pebbles and shingle to provide protection against Boer rifle fire. By the time the guerrilla phase of the war began, the Boer commandos lacked artillery, so these corrugated iron blockhouses were not endangered by shellfire. Cheap to manufacture and quick to erect, 7 000 of them were made and placed in long lines, about eight hundred metres distant from one another and connected with barbed wire fencing. While General De Wet called the blockhouse strategy a ‘blockhead’ strategy, there is little doubt that these extensive lines of blockhouses limited the mobility of the Boer commandos.

From the Witkop Blockhouse, we left in convoy to travel a further twenty kilometres to Redan, where the last surviving rock engraving site in Gauteng is situated. Mr Pieter Hamman, proprietor of the farm where the site lies, kindly gave permission for us to visit it.

Our guide here was Dr Jeremy Hollmann, an authority on rock art who has recently completed an archaeological impact assessment of the Redan site because of an application made by a mining company to strip mine the coal seams in the vicinity. Dr Hollman spoke to us about the possible symbolism of the approximately 277 engravings found on eighteen outcrops of Ecca sandstone. 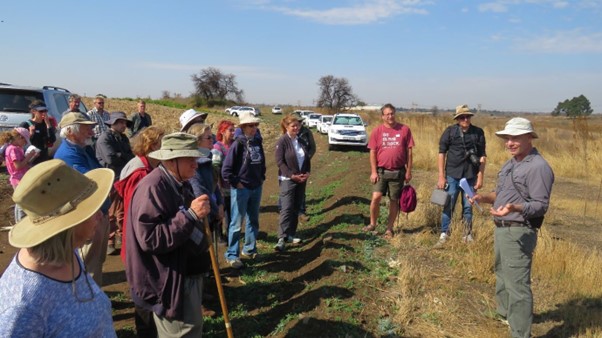 Dr Jeremy Hollmann addresses the group at Redan. The rock outcrops are situated behind him.

The Ecca sandstone outcrops at Redan lie on the banks of a now degraded seasonal tributary of the nearby Klip river. Not far away is the confluence of the Vaal, Klip and Suikerbos rivers. According to Dr Hollmann, this well-watered area, with its lush grasslands for grazing and wildlife, must have been considered very desirable by early pastoralist communities.

Scholars of the subject feel that engravings of animals were generally made by hunter gatherers, while geometric patterns were engraved by pastoralists. Since the engravings have significantly eroded over time because of the ongoing contraction and expansion of the rock surfaces, Dr Hollmann feels that they could not have been made before 1 000 years BP. 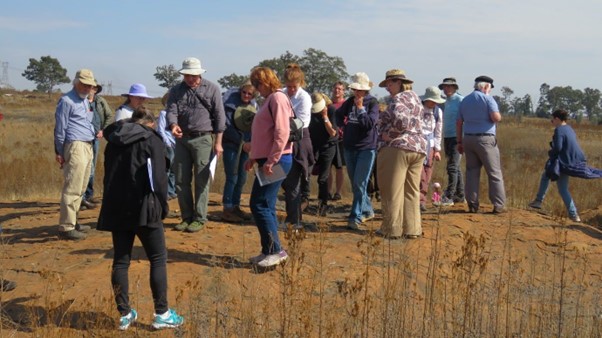 The group examines rock engravings on one of the Ecca outcrops. The seasonal stream lies just beyond the outcrop.

According to Dr Hollmann, the geometric images were probably associated with female puberty and initiation rites. In these rites, as practised in pastoralist and herder societies, the young women were separated from the community and cared for by the grandmothers or aunts. They would have been fed fatty foods since fats were associated with good health. Upon completion of the initiation rites, the young women re-joined the community as new persons. They were dressed up, given presents, beadwork and necklaces, and had their bodies painted and beautified. Dr Hollmann hypothesised that the designs on the clothing of the young women might have been copied in the engravings.

There might have been a link between the young women and the river snake that lived in the Klip and Vaal Rivers. These so-called ‘new women’ would have had to establish relationships with this water snake that sunbathed on the rocks overlooking the two rivers.

This association or link could have been established or strengthened by the rock engravings. 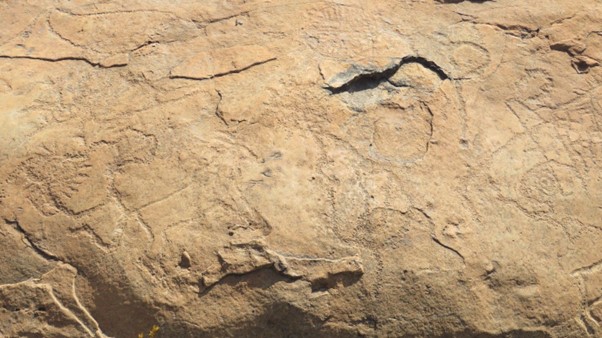 An engraving of an antelope surrounded by geometric figures

Possibly water would have been splashed on the young women, and the way the water fell would have predicted favourable or unfavourable outcomes in life. 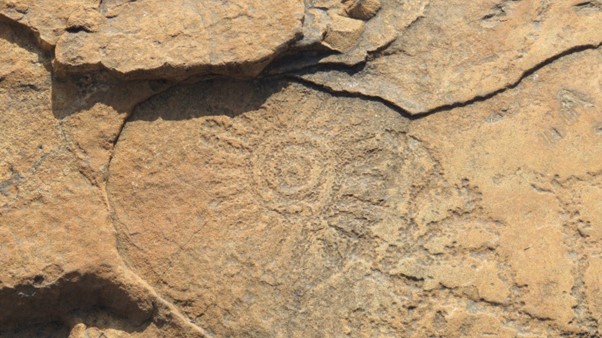 In certain communities, animals would have been engraved, as animals have many qualities that were considered desirable for women.

In the distance, across the dry and degraded stream, we could see the houses and offices of the now defunct Klip power station, which shut down in the early 1970s. The adjacent Springfield coal mine, which used to supply the power station with coal, closed decades earlier, after which coal was railed from another coal mine further away. According to local lore, tunnels of the Springfield Mine penetrated to below the Redan rock engraving site. If this was the case, the collapse of one of these abandoned and now waterlogged underground tunnels might have led to the formation of a nearby sinkhole. Together with the pollution and acid rain caused by heavy industries in the Vaal Triangle, it threatens the survival of these important rock engravings.