Our outing was led by Associate Professor Dominic Stratford of Wits University, who is the research co-ordinator at Sterkfontein Caves. On a lovely Highveld autumn morning, we met in the carpark at the caves. Dominic gave us an overview of what we could expect: First, a visit to the laboratory; then entry into the cave to visit the Silberberg Chamber where Little Foot was discovered; and finally a visit to the Tobias Shed and observation of the deep excavations on top of the Cave complex, also known as Member 4, where approximately 300 000 fossils have been found to date. 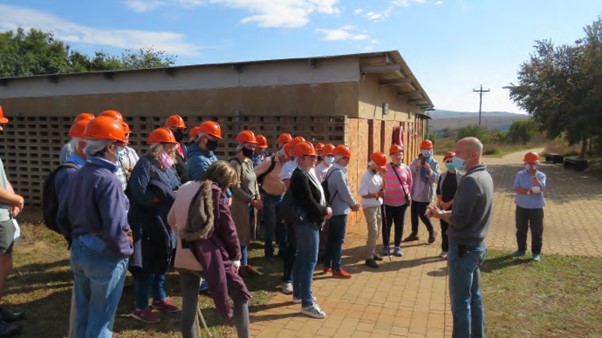 Dominic Stratford addressing us in front of the laboratory building

Archaeological exploration of the Sterkfontein Caves followed several decades after the mining and harvesting of the stalactites and stalagmites found there. They were used for producing lime for the early gold mining industry in the late 19th century.

Gazing to the north from the car park, we could observe the dolomitic hills and terrain that served as the perfect environment for the creation of caves. Slightly acidic groundwater absorbed carbon dioxide from decomposing plant material and when this weak carbonic acid seeped into the dolomite, it carved out caverns that gradually deepened and enlarged over time.

It seems that the Sterkfontein cave complex, unlike European caves, was never actually  used as an occupation site by hominins. However, bones and other material eaten or scavenged by animals would have been washed into the cave openings. Animals as well as hominins could accidentally have fallen through the concealed cave entrances into the deep caverns below, where their bones would have become cemented with calcium carbonate, thus creating the fossils found there.

We then walked across to the laboratory, which serves as a control repository site. This is where the Sterkfontein technicians carefully remove the fossils from their encasing rock and breccia. 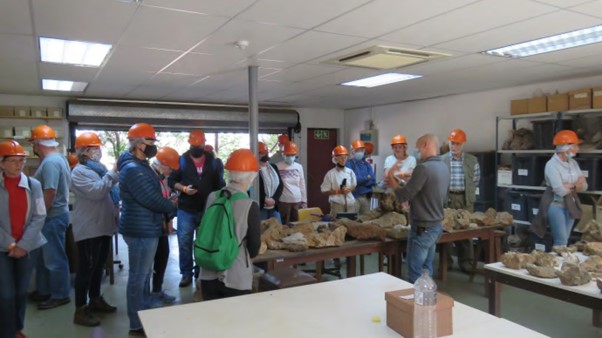 Our group inside the laboratory 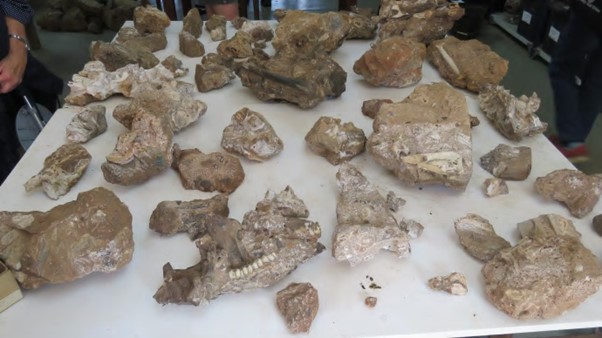 We then descended into the Sterkfontein Caves through the main entrance before turning into the Silberberg Grotto. This is named after an antiques dealer who found and removed the fossilised remains of an early type of hyena in the 1930s.

In the Grotto, which is fenced off from the normal tourist route by a large metal gate, Dominic pointed out to us where the fossilised remains of Little Foot were found. He explained that in 1994 Professor Ron Clark was re-examining some of the fossils that had been found in this chamber and stored at Wits University. He found four bones that belonged to the left ankle and big toe of an early hominin. Going through more of the boxes, which were labelled ‘monkey fossils’, he found additional bones of hominin origin. Upon closer examination of the right shin bone, he realised the bone had been broken when the early miners had blasted the breccia out. After making a cast of the end of the shin bone, he asked two of the fossil preparators at Sterkfontein, Stephen Motsumi and Nkwane Molefe, to try to find the other end of the shin bone in the Silberberg Chamber. Amazingly, they managed to do this on only the second day of searching. 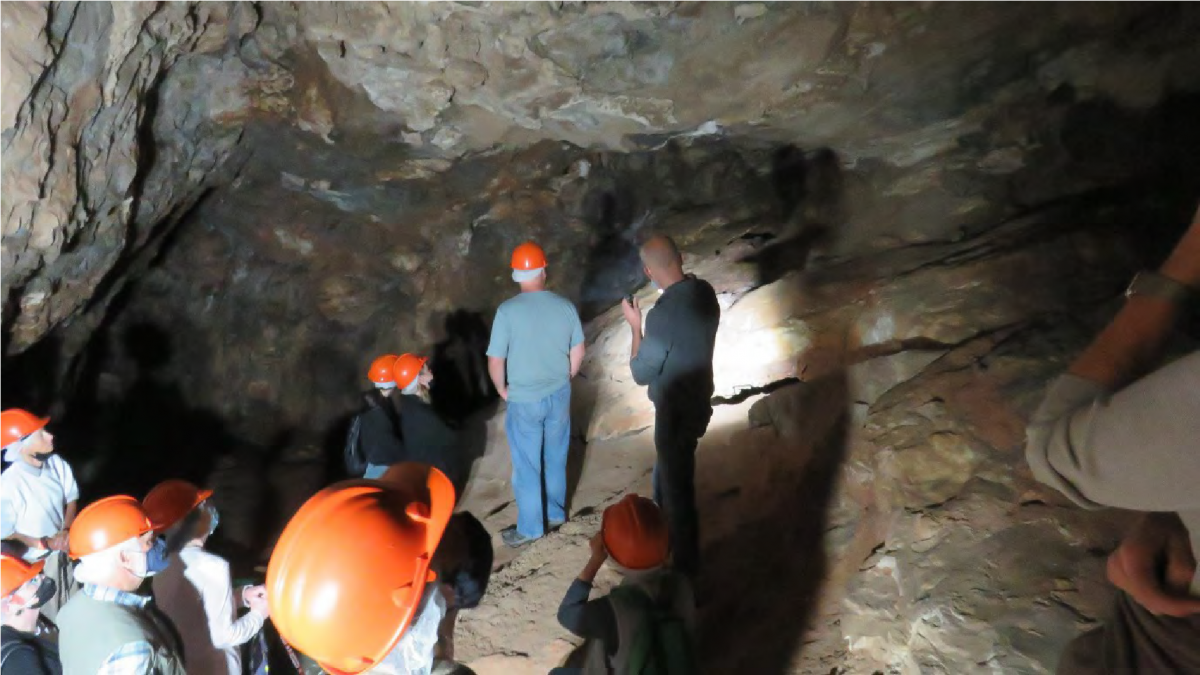 Dominic pointing out where the fossilised remains of Little Foot were found in the Silberberg Grotto.

These fossilised remains were found to have been broken at the femur bones into two sections, with the upper body encased somewhat below. Then the process began of painstakingly removing the remains from the encasing rock and breccia. It took almost 20 years. This was the first time a full skeleton of a hominin had ever been found.

Still thrilled by having viewed the site of this wonderful discovery, we ascended through the main entrance and then proceeded to the archaeological excavations above the Sterkfontein cave complex.

Robert Broom commenced excavations here in 1936, and in 1947 discovered the famous fossil named Mrs. Ples (towards the left rear of the scaffolding in the photo below). Mrs. Ples was the first discovery of the species that was subsequently named as Australopithecus africanus. 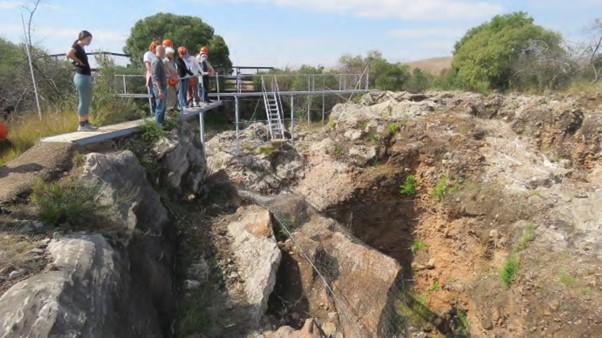 View of the excavations above the cave complex

From the mid 1960s, Phillip Tobias and Alun Hughes excavated here. In the big hole in the foreground of the photo above, named Member 4, they discovered about 300 00 fossils. Since Hughes unfortunately omitted to record the stratigraphy of the location of the fossils, archaeologists are attempting to reconstruct where these fossils were found.

At the Tobias Shed we were delighted to observe a copy of the fossilised skeleton of Little Foot. Professor Clarke described it as a member of the Australopithecus prometheus species 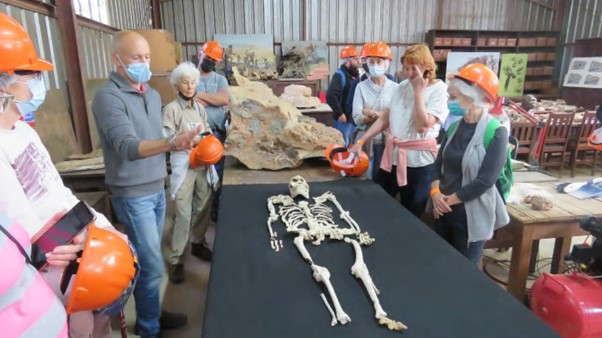 The copy of the skeleton of Little Foot

Dominic then pointed out some of the aspects of the skeleton of Little Foot worth noting.  It is probably the skeleton of a female who would have walked erect but was probably not much of a runner. She had an unusually strong and large thumb, together with powerful shoulders that would have enabled her to pull herself up trees and heights, probably to assist her foraging efforts. Her skull was somewhat distorted by the weight of the rock originally resting on it, and technicians at Wits University were reconstructing a copy by means of computer graphics.

After discussing some of the other interesting models of skulls in the Tobias Shed, we made our way to the grass verge at the parking lot, where we enjoyed a companionable picnic lunch.

Our thanks to Professor Dominic Stratford for a very informative and enjoyable outing.