Melville Koppies Nature Reserve is a beautiful oasis of indigenous Bankenveld grassland on a ridge that borders the suburb of Melville in the heart of Johannesburg. From the top of the ridge, visitors have attractive views of the city to north and south. The reserve, 50 hectares in extent, was established by the Johannesburg City Council in 1963. Archaeologists have uncovered cultural remains left by different groups of people who lived there from several hundred thousand years ago until the mid-nineteenth century. 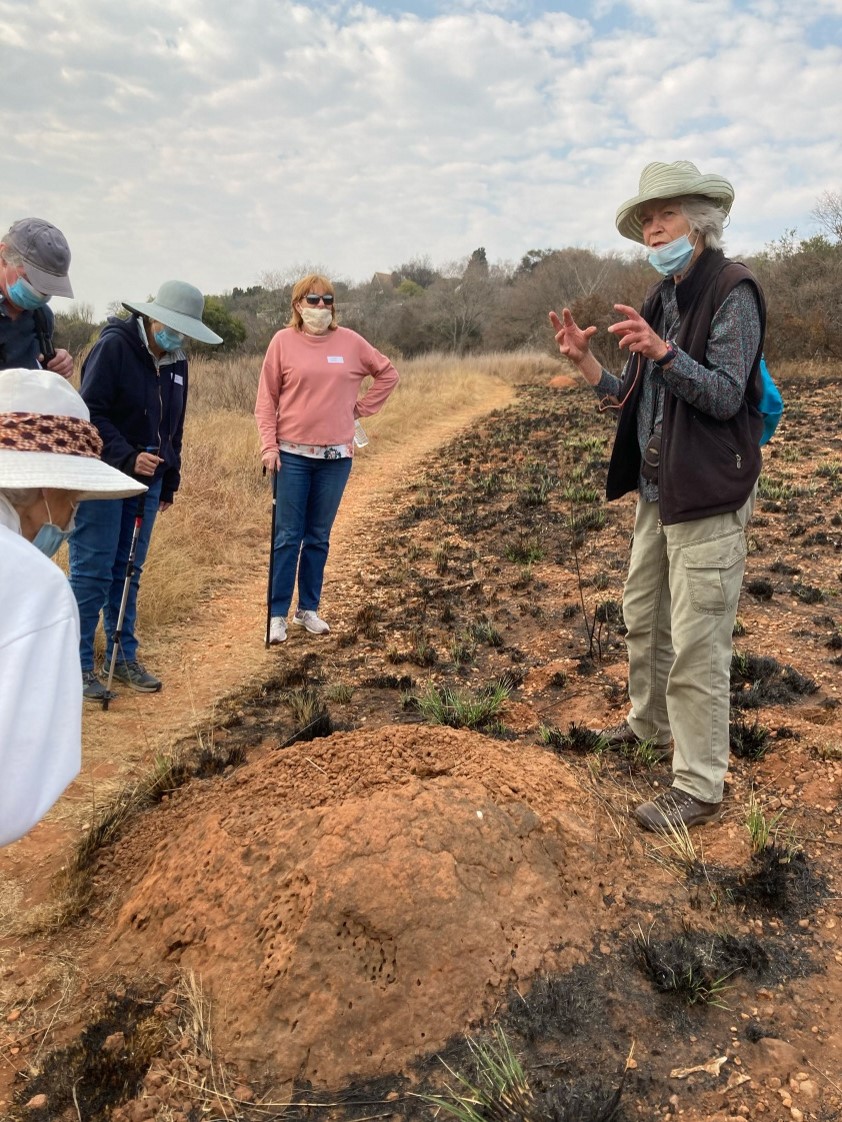 Wendy Carstens discusses the ecology of a termite mound

Eighteen members of the Northern Branch of the Archaeological Society signed up for a tour conducted by Wendy and David Carstens, who are leading lights in Friends of Melville Koppies. Because of covid restrictions, we were divided into two groups for the first part of the tour. This took us along well-maintained paths, winding up from the entrance in Judith Road in Emmarentia to just below the summit of the ridge. We had frequent stops for our guide – Wendy, in this case – to discuss features of the reserve’s plant life, and of the grass-burning and bush-clearing programmes that are needed to maintain some kind of balance between the different species. There are no large animals in the reserve: they would very quickly be poached in spite of the fencing that surrounds it.

We passed the site where, in the 1960s, archaeologists had excavated a smelting furnace made by the Setswana-speaking farmers who lived on the ridge several centuries ago. It was vandalized in 1998; now nothing remains except for a notice that informs viewers of the fact. Further on was a habitation site where the grass is kept cleared to enable visitors to see the remains of two interlocking stone walls. One would have surrounded a dwelling hut, the other perhaps the perimeter homestead wall. African farmers would have favoured the ridge as a place to live because of the availability of wood for building, cooking and smelting, and because the nearby stream, now called the Westdene Spruit, provided year-round water for people and animals. Gardens and fields would have been located in the more open land at the foot of the ridge.

Nearby, on a flat ledge, was the site of a camp made by Bushman hunter-gatherers. There is no sign of it to catch the untrained eye, but archaeologists have recognized it from the presence of stone artefacts. Just behind are the remains of stone walling built by early Tswana-speaking farmers. Higher up the slope, and now well hidden by bush, are the remains of a stone sheep kraal. 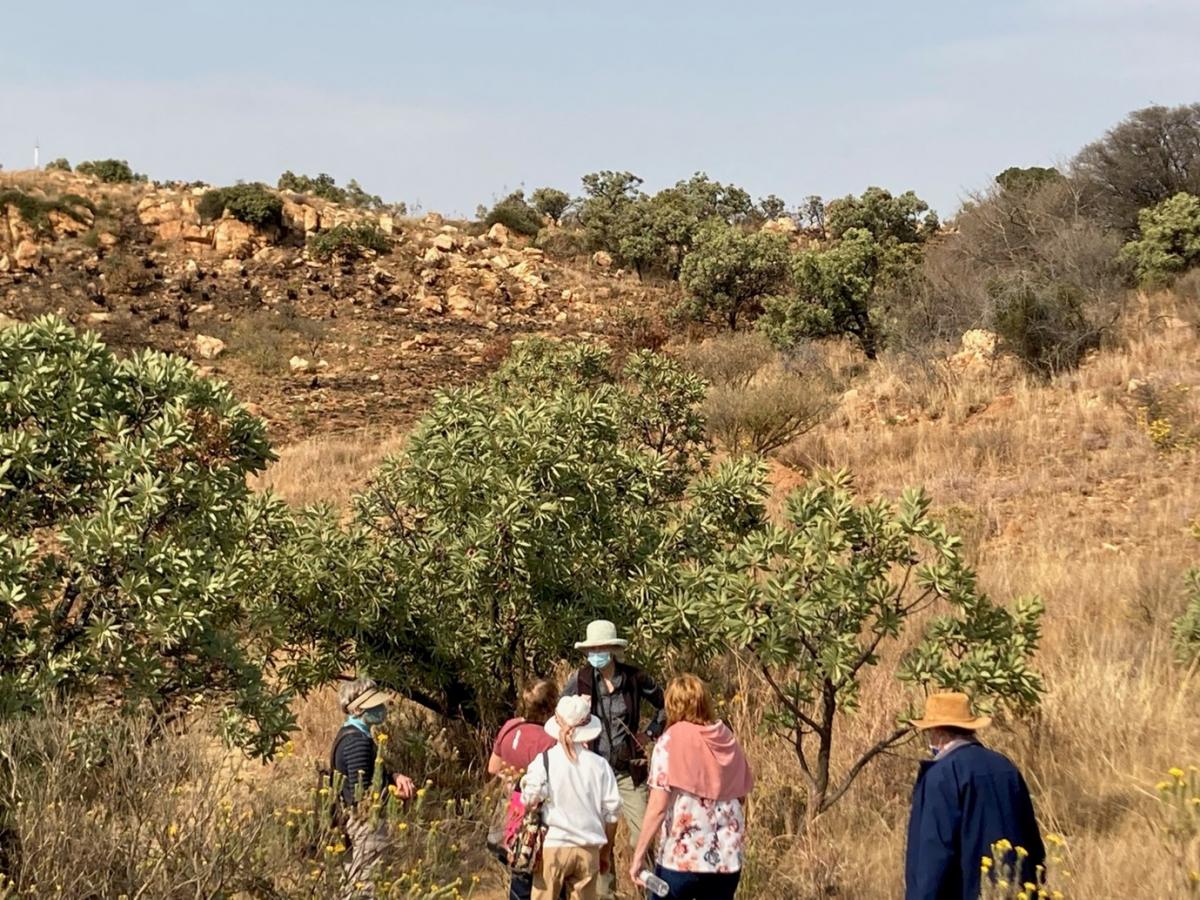 Back along the ridge to the east is the site of another smelting furnace. This was excavated in 1963 by Revil Mason, head of the Archaeological Research Unit at Wits. The remains, well protected by thick glass, are on display for visitors to see. Close by is the Lecture Hut erected by the Melville Koppies Management Committee to house displays of the geology and archaeology of the reserve. The two Archaeology Society groups met up again here to hear two informative talks by Wendy and David Carstens, respectively on the geology and archaeology, and on the ways in which iron was smelted and forged at the site in past centuries. This was the coda to an excellent tour in fine surroundings. 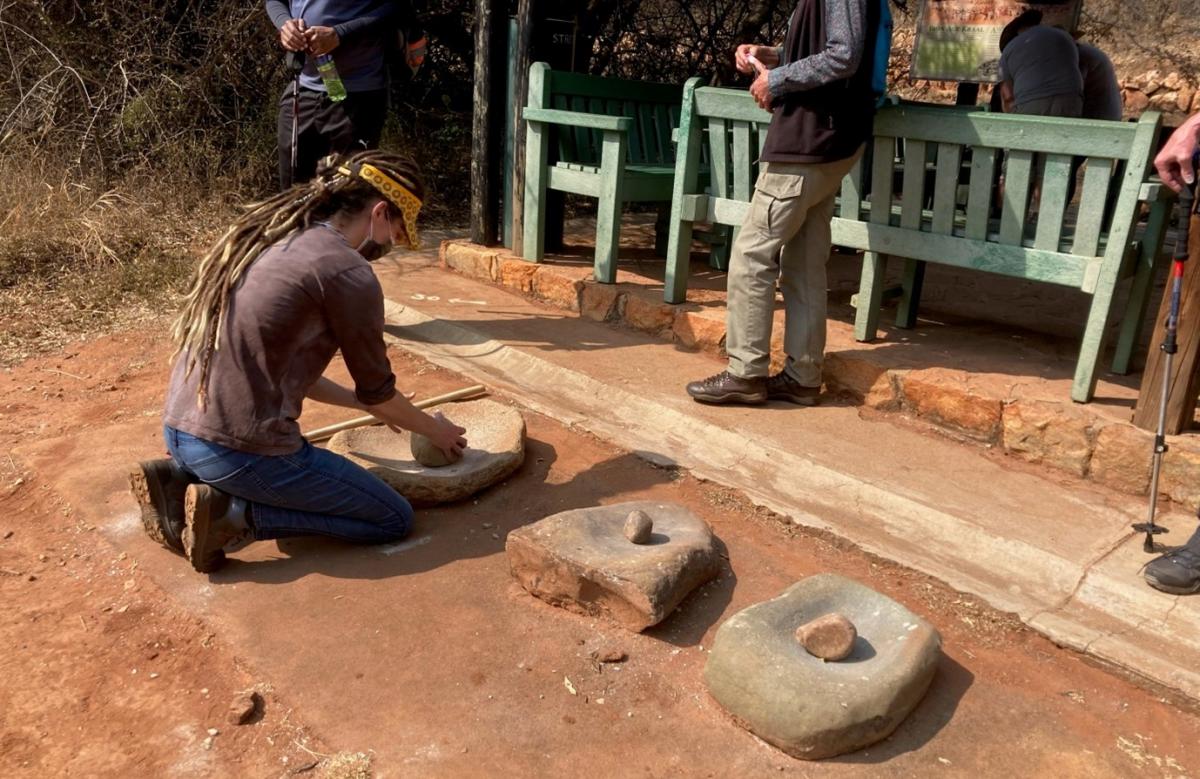 The reserve is maintained by the Friends of Melville Koppies in conjunction with Joburg City Parks. It is the only conserved remnant of Johannesburg’s ridges as they looked before the expansion of the city. It is open on Sundays from 08:00 to 11:30. Visitors can either join a pre-booked tour, or explore the reserve on their own. Both highly recommended. For further information go to www.mk.org.za.

[With acknowledgement to Wendy Carstens. Photos by Cara Pretorius.]