After a lovely drive through the Cradle of Humankind and surrounds, a group 12 ‘Arch Soccers’ met with our expert guide, Prof Justin Bradfield, at the tranquil fishing area of the Olifantsnek Dam, which is on the Hex River, Rustenberg District, Magaliesberg.

From our cars, it was a 15 min walk/hike up to the cave, with a bit of steep area near the cave entrance. The cave is just above the dam wall – a wall that was built in 1936 – in the dip between the two hills seen in the pictures above. The area in the last few thousand years would have been a grassland plain and the site would have been well-located for hunter-gatherers in terms of access to food and resources. 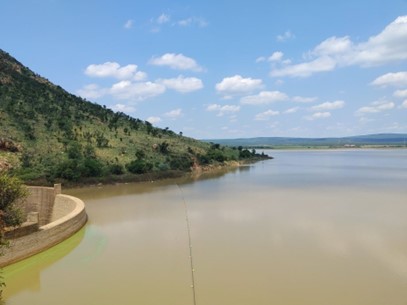 View of the dam wall from the near the entrance of the cave.

As we started our tour, Justin made the important point that the cave has been re-inhabited by many different people and groups for many years – and this re-habitation continues with Pastor Joshua who currently lives semi-permanently in the cave. Justin has worked closely with Pastor Joshua to ensure the deposit is protected as much as possible while respecting the Pastor’s needs to use the cave for his spiritual activities. The Pastor started visiting the cave in 2009 after being shown the cave in a dream, and has lived more permanently in the cave since 2015. 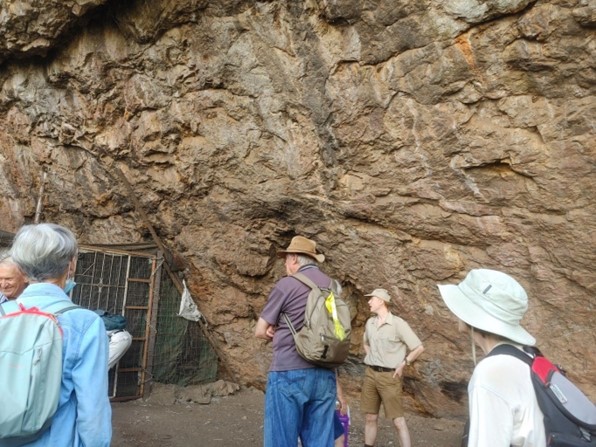 Kruger Cave was first excavated in 1956 by Revil Mason. In 1982/3 Robbie Steele (under the directorship of Revil Mason) excavated the cave as a rescue operation because the site was being vandalised. The vandalism (and illegal excavation) at the site may have been prompted by rumours that Paul Kruger stashed his gold and relics in the cave. This is also probably how the cave got its name.

Robbie Steele excavated a large and long 24 m x 1 m pit through the deposit, going down to a maximum of 90 cm from the surface. Sadly, after the excavations, the pits were not back-filled and so the exposed pit profiles have slowly eroded over time. The cave sediment has been somewhat protected, with the erection of a fence stopping access to the back areas of the cave and the archaeological deposits. 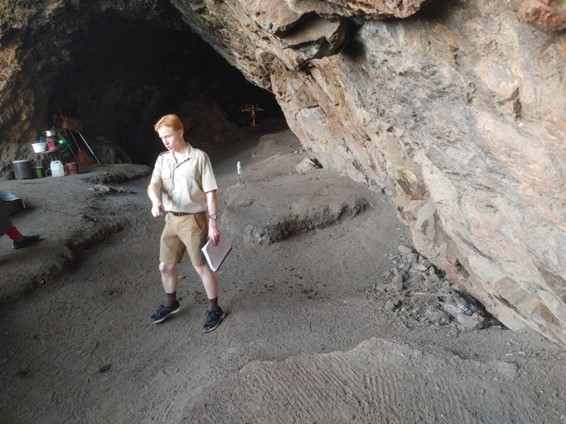 Justin showing the area excavated by Robbie Steele. The eroded walls of the excavation pit are clearly seen.

There is faded rock art at the site (one of only seven rock art sites in the Magaliesberg), some of which was recorded by Harold Pager who worked at the site in the 1970s. He recorded 57 images painted on the walls, mostly human figures but also some animals and birds. Very few painted images are visible now. 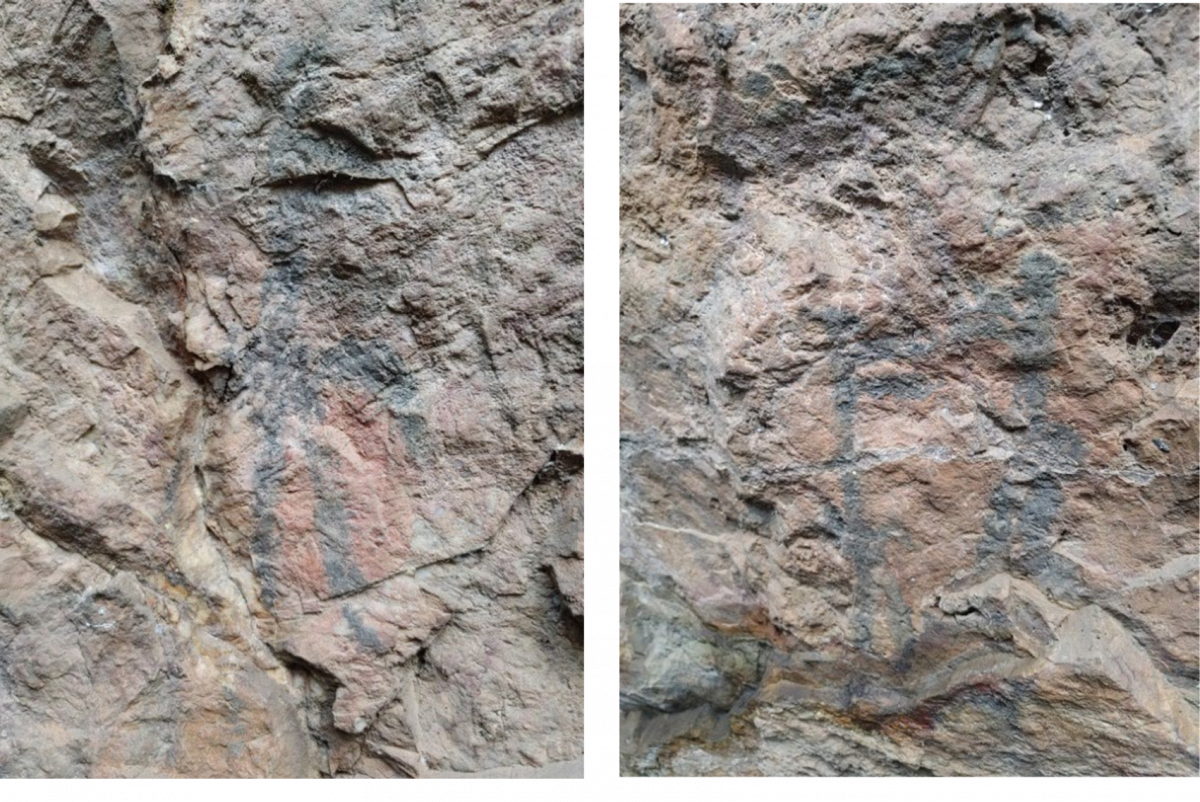 The oldest deposit at the site is dated to ~10 000 years ago (the Oakhurst lithic industry), but most of the deposit is dated between 7000 and 5000 years ago, also Oakhurst but with generally smaller tools. Jubilee Shelter, on the other side of the Magaliesberg, would have been inhabited around the same time, with Wilton lithic assemblages (6-5000 years ago).

Beautiful stratigraphy is still visible in the exposed sections.

A third period of occupation at the site is dated to AD1000 – 1300 when the site was inhabited by African agriculturalists. It was likely these groups who painted the cave. There are a few Iron Age artefacts at the site but the cave preserves some of the earliest evidence of Iron Age occupation in the Magaliesberg. There is no evidence that people lived at the site for long periods after AD1300. In the 1930s, during the time the dam wall was being built, there was a blacksmith’s workshop in the cave. 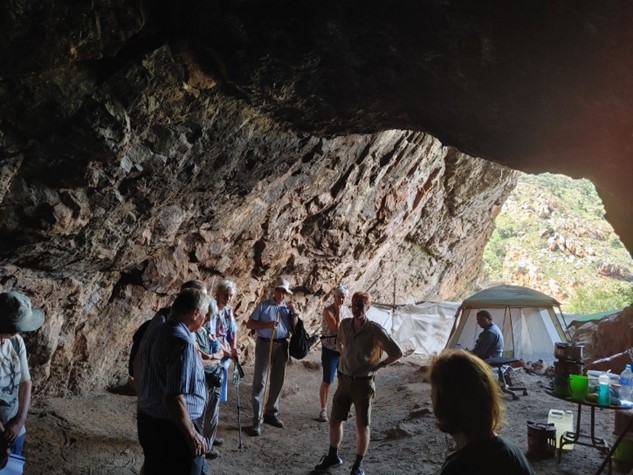 A view from the rear of the cave looking out.

The preservation is remarkable at the site. In the younger layers, Mason and Steele excavated an animal bladder with human hair attached to it dated (by 14C dating) to 500 years go. DNA tests are yet to be done on the hair. These types of bladder and peg caps were used by the Nguni, suggesting the artefact was from the second quarter of the 19th century when Mzilikazi’s Ndebele moved through the area.

In 6000-year-old layers (and mostly from the area near the rear of the cave) bone tools, decorated bone points, ostrich eggshell beads, wooden arrowheads, rope and bones of extinct springbok were found. A beautifully decorated bone point, with poison hafting adhesive and red ochre paint still adhering to it, was found in the cave – the oldest known poison bone arrow in the country. A long bone of an animal was found with arrowheads embedded inside the cavity like arrows in a quiver. The bone has substance inside it – probably mixtures of marrow, dirt, fat or even poison.

Plant bedding was uncovered in the 5000-year-old layers and some of is still visible in the profiles.

The Kruger Cave artefacts are now housed in the Wits Archaeology Collection. 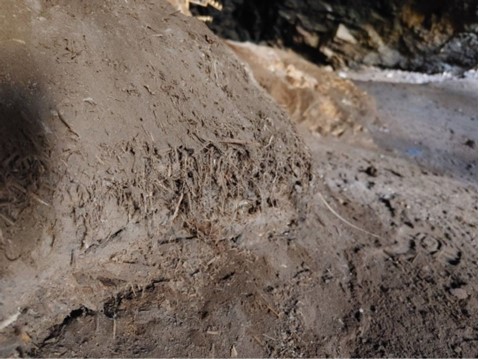 Plant bedding still visible in the profiles near the rear of Kruger Cave.

Interesting facts and input from Vincent Carruthers about the area and history were greatly enjoyed, as well as sharing of images and X-Rays of the artefacts found at the site from Mason’s 1988 publication on Kruger Cave. 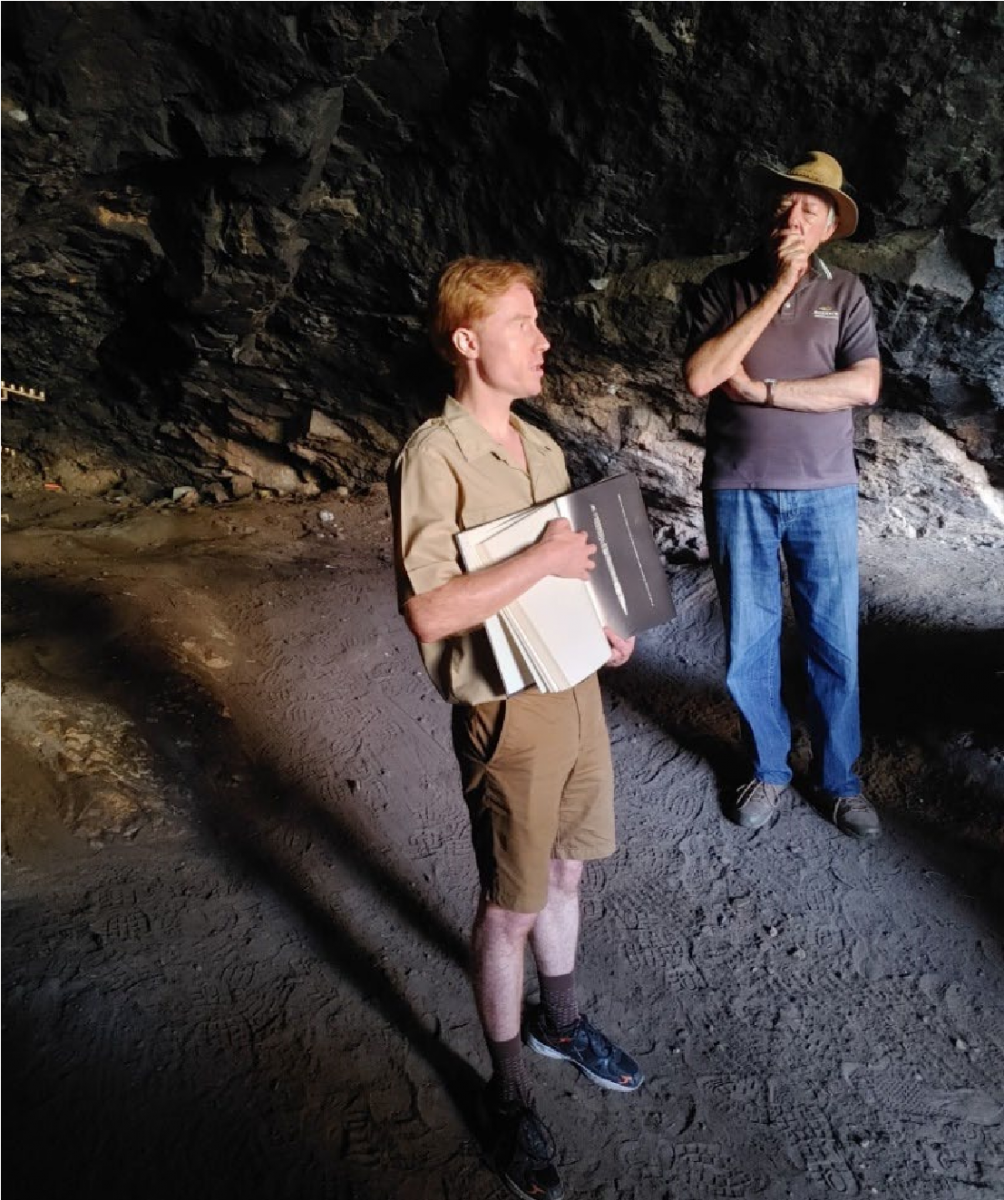 Pastor Joshua continued the tour with interesting facts about his time there (although sadly losing the attention of some members on the tour). He has come across many animals in the cave who use the cave and contribute somewhat to the erosion of the sediment – monkey, snakes, tortoise and even leopard. Pastor Joshua wrote a book while he was here in the cave – a cave in which he feels his spirit is free. He often fasts when he is here and hosts prayer and healing sessions for his congregants. 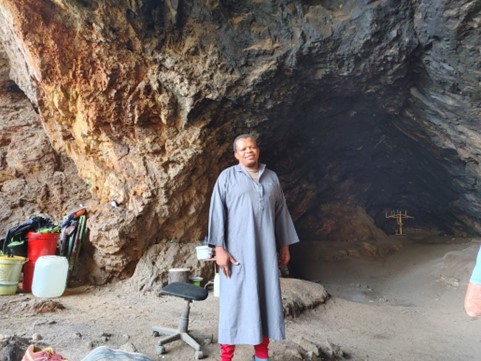 Pastor Joshua is a custodian of the site and he has respect for the history archived in the cave and tries to protect the sediments to the best of his ability. The rehabilitation work Justin is undertaking this April will greatly help with this. Justin is working on reconstructing the site with 4000 kg or more of sand and the help of archaeology student volunteers. He will not be renewing excavations at this time although the repair work includes opening up two sections and excavating stratigraphically, and hopefully obtaining bedding samples for DNA analysis. The profile walls will then be stabilised by sandbagging and backfilling the excavation trenches. For those interested, images of the rehabilitation progress can be found on the ‘UJ Palaeo Institute’ Facebook page.

After the tour we walked along a grassy ridge on the other edge of the cave, nearer the dam wall, and had a picnic lunch together. We would like to thank Justin for giving us an excellent tour of Kruger Cave, and thanks to Pastor Joshua for welcoming the group as well.

Report and photos by Tammy Hodgskiss