Twenty-one members attended this outing to the Kromdraai Excavation Site. Having experienced some cold weather a few days before, we were delighted that the weather deities granted us a sunny and windless winter’s morning. 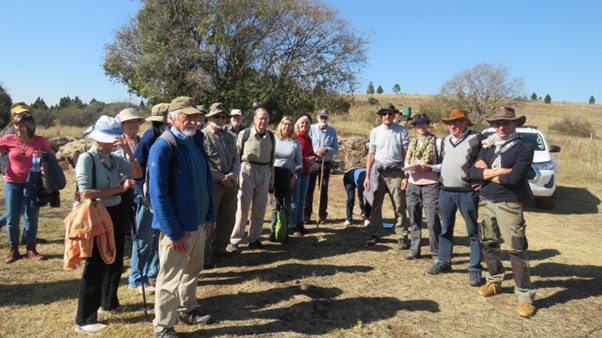 At the Kromdraai B Excavation Site with Professor José Braga on the right.

Rather unusually for ArchSoc, our outing took place on a Thursday morning because of

Professor Braga’s hectic schedule. Hailing from the University of Paul Sabatier in Toulouse, Prof Braga (in conjunction with the Kromdraai Research Project) has been excavating this unroofed dolomite cave site periodically on an annual basis, since 2002.

Prof Braga commenced his talk by pointing to the various important archaeological sites situated east, but close to Kromdraai B: Swartkrans, Sterkfontein and Coopers. Due north of Kromdraai, but more distant, lies Drimolen, with Malapa beyond.

Some of us who visited Kromdraai on a previous ArchSoc outing several years ago were surprised to find the then rather shallow excavation has been significantly deepened and enlarged.

The Kromdraai Excavation Site came about by the discovery here in 1938, by 15-year-old schoolboy Gert Terblanche of the first teeth of a robust fossil specimen, weathering out of a block of cave brecchia. According to local lore, when Dr Robert Broom saw this unusual fossil, he immediately called Terblanche out of his classroom and asked to be shown where it had been found. Broom named this different and larger specimen Paranthropus robustus.

The Kromdraai Excavation Site comprises a complex of breccia-filled caves in Precambrian dolomite two kilometres east of Sterkfontein in the Blaauwbank valley. There are two fossiliferous localities within 30 m of each other, Kromdraai A and Kromdraai B.

Kromdraai C, adjacent to Kromdraai B, is less important as no fossils or artefacts have been reported from this locality.  See image below.

Kromdraai A has not yet yielded any hominin fossils and is therefore called the ‘faunal site’ or ‘KA’; while Kromdraai B, is called the ‘hominin site’ or ‘KB’. After the discovery of the specimen of Paranthropus robustus in 1938, Robert Broom led the first excavations in KB, followed by Bob Brain in 1955, Elisabeth Vrba in 1977, and Francis Thackeray in 1993, with the current excavations led by José Braga. 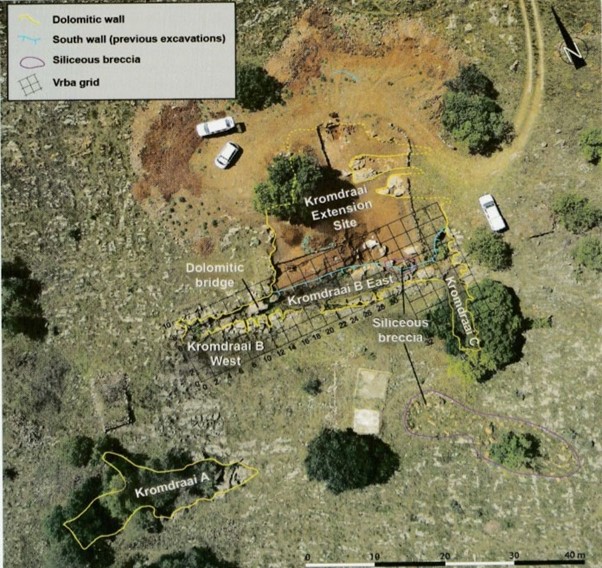 An earlier Aerial View of the three KB sites - Kromdraai B West, B East, and B Extension. Photo sourced from ‘Kromdraai a Birthplace of Paranthropus in the Cradle of Humankind’, edited by J Braga and JF Thackeray.

On this outing we only focused on the KB site. This site has now been further divided into three units, namely KB West, KB East, and KB Extension, although to the layman they seemed so interlinked as to constitute a single unit.

The three Kromdraai B units correspond to a single unroofed cave, part of a large network of caverns formed during the Miocene-Pliocene periods (23 to 2.6 million years ago), and partially eroded due to the deepening of the valley.

Since 2014, close to 3 000 fossils have been recovered at the Kromdraai Extension site. These new fossil discoveries confirmed that the Kromdraai B site is at least six times larger than previously thought and is rich in microfauna as well as fossil hominins. 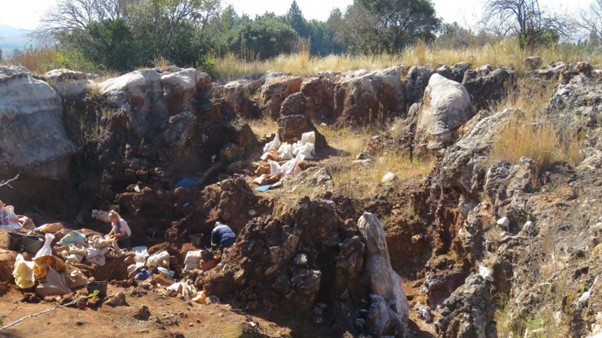 View of the excavation at the Kromdraai B Extension site. Note the large stalactite to the bottom right.

Prof Braga and his team are searching for the proverbial needle in the haystack.

Archaeological research demonstrated that that the KB hominins possessed unique dental and mandibular (lower jaw) characteristics that differentiated them from Australopithecus africanus. Further discoveries and analysis of Paranthropus africanus will increase our knowledge of how to interpret the source populations for the Paranthropus lineage.

Wishing Prof Braga good luck with his excavations, we returned to the Sterkfontein parking lot, to enjoy a sociable picnic lunch.