Outing to Ditsong National Museum of Natural History, Pretoria
By:
John Wright.
Date:
Sat, 26/02/2022 - 10:00
Branch:
Northern
Ditsong means ‘place of heritage’ in Setswana. A new name for an old edifice built in colonial monumental style. It was founded as the Staatsmuseum of the South African Republic in 1892, later became the Transvaal Museum, and in 2010 became the Ditsong National Museum of Natural History.

After palaeontologists like Raymond Dart, Robert Broom and others began finding fossils of a variety of early humans and their relatives in the 1920s and 1930s, the notion of ‘natural history’ expanded to include remains of this kind. Under Dr Bob Brain, director from 1965 to 1991, the Transvaal Museum became a major centre of palaeontological research. Brain himself worked for some 30 years at Swartkrans in what is today known as the Cradle of Humankind. The museum built up a major collection of hominin fossils, as well as the largest collection in Africa of skeletons of mammals ranging in size from elephants to rodents. 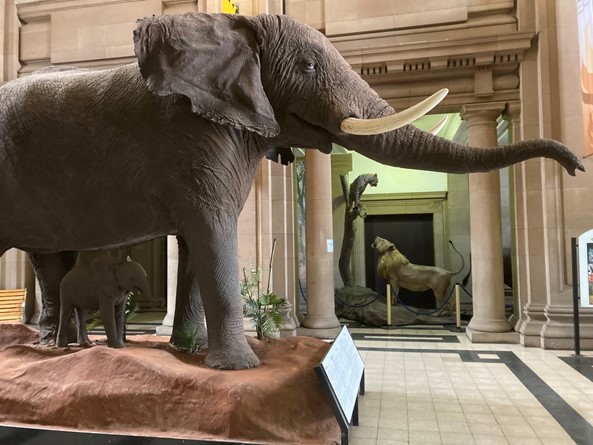 Photo: Cara Pretorius
Every major colonial museum had to have a big stuffed animal in the foyer.
This elephant faces the entrance of the Ditsong National Museum of Natural History.
Thirty members of Arch Soc gathered for a behind-the-scenes viewing of some of the museum’s holdings. We split into two groups, for Mr Lazarus Kgasi of the Department of Palaeontology to introduce us to the hominin fossils in ‘The Broom Room’ named after Dr Robert Broom who collected many of the specimens housed within, and for Dr Annie Antonites of the Department of Archaeozoology to tell us about research in the department. 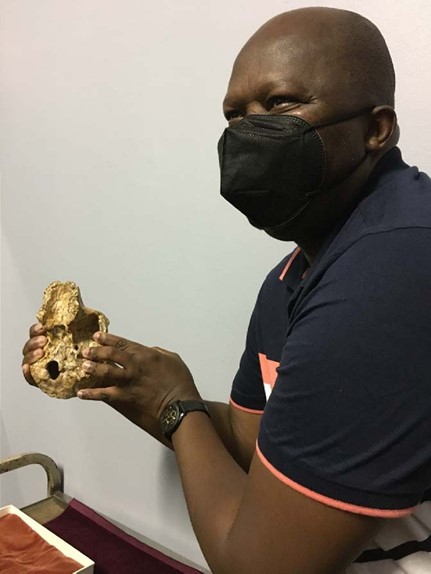 Photo: Louise Mackechnie
Lazarus Kgasi shows us Mrs Ples from the collection in The Broom Room.
The Broom Room is aptly named, a small room not much larger than a spacious broom cupboard. It is kept securely locked and at a constant temperature to help preserve the collection of fossils stored in it. The highlight of our rather crowded visit to it was viewing – and holding, with Mr Kgasi’s permission – the well-known fossil skull of ‘Mrs Ples’, discovered by Robert Broom and John Robinson at the Sterkfontein Caves in 1947. But there was much more to see by way of fossils from Sterkfontein, Swartkrans and Kromdraai. We also heard from our guide about how new ideas about our human family tree are emerging as research proceeds. No longer do palaeontologists look for evidence of linear evolution from early ancestors to modern humans; instead, they think in terms of a tree branching out over time into several different species and sub-species. Today only one of these – Homo sapiens sapiens – still exists.
Ever since Raymond Dart described the ‘Taung child’, a fossil discovered in 1924, as belonging to a genus related to ancestral humans, palaeontologists have argued – often angrily – about the precise classification of hominin fossil finds. For many years they had a strong sense of private ownership of their particular discoveries. Today, Mr Kgasi told us, this attitude is giving way to one of wanting to share knowledge, and as far as possible opening up viewing of fossils and sites to the interested public. 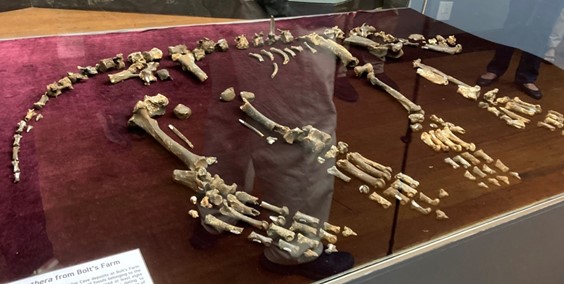 Photo: Cara Pretorius
Fossil remains, about 1.8 million years old, of a lion-like animal of the genus Panthera
found at Bolt’s Farm
He went on to tell us about his own involvement in excavations of the fossil site at Bolt’s Farm in the Cradle of Humankind near Sterkfontein, where a joint South African-French team has been working since 1995. The funding comes from France. ‘Our government doesn’t care about fossils,’ Mr Kgasi said – unless there are photo opportunities for the bigwigs.
We finished this part of the tour by viewing the well-put-together exhibition titled ‘The Plio-Pleistocene Collection of Ditsong Museum of Natural History’. It shows the progression from a science that portrayed exclusively the roles played by white male ‘discoverers’ to one that shows the diverse roles played by the members of research teams, including the skilled manual workers who do most of the heavy lifting.
In the Department of Archaeozoology, Dr Antonites presides over a collection of thousands of animal bones. She told us that the department had been established in the 1970s by Dr Bob Brain to meet the growing need for specialists in the study of animal bones. The staff use their expertise to identify bones for a range of researchers working in many areas of Africa – palaeontologists, archaeologists, zoologists, evolutionary biologists and others. Research into animal bones is particularly important for helping to determine the nature of the environments that people have lived in, from the earliest times to the recent past. 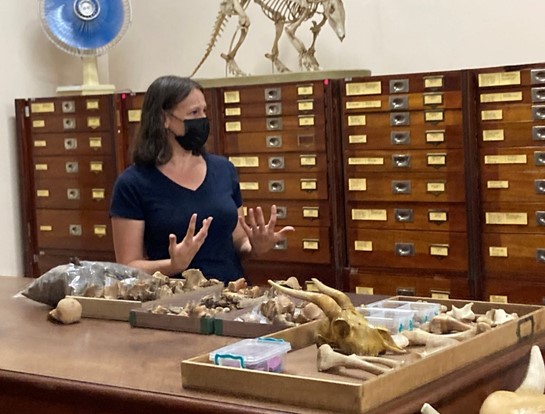 As an aside, Dr Antonites made the point that women researchers have been involved in archaeozoology from the start, but that most of the publicity has gone to white males. They have tended to present themselves as specialist palaeontologists in a narrow sense. In contrast, Dr Antonites said, she sees herself as a social scientist with an interest in past human behaviour as well as an archaeozoologist who works with bones.
Currently, Dr Antonites told us, she is involved in sorting and identifying bones from a rescue dig that was conducted last year at an early farming site on the banks of the Letaba River in the Kruger National Park. The site dates to between 700 and 900 CE; among the artefacts found there were three pieces of Persian pottery, which points to the existence of contact with traders on the coast of Mozambique. Another unusual feature is that most of the bones from the site are those of large animals. This has led to speculation that these animals were being hunted for their meat, and that meat was an item in early trade between the interior and the coast. This is the first time that this idea has been proposed.

The rescue dig yielded some 300 kg of bone material. Wry comment from Dr Antonites: ‘It will keep me busy for the rest of my career.’