The Kloofendal Nature Reserve comprising 128 hectares was one of the first nature areas proclaimed in the Greater Johannesburg area. Here on 18 September 1884 Fred Struben discovered a promising quartz reef on the farm Wilgespruit. Joined by his brother Harry, they named this the Confidence Reef. By the end of 1885, their 5-stamp battery imported from Chester England, was in full swing. This was the indeed the first crushing plant on the Witwatersrand. 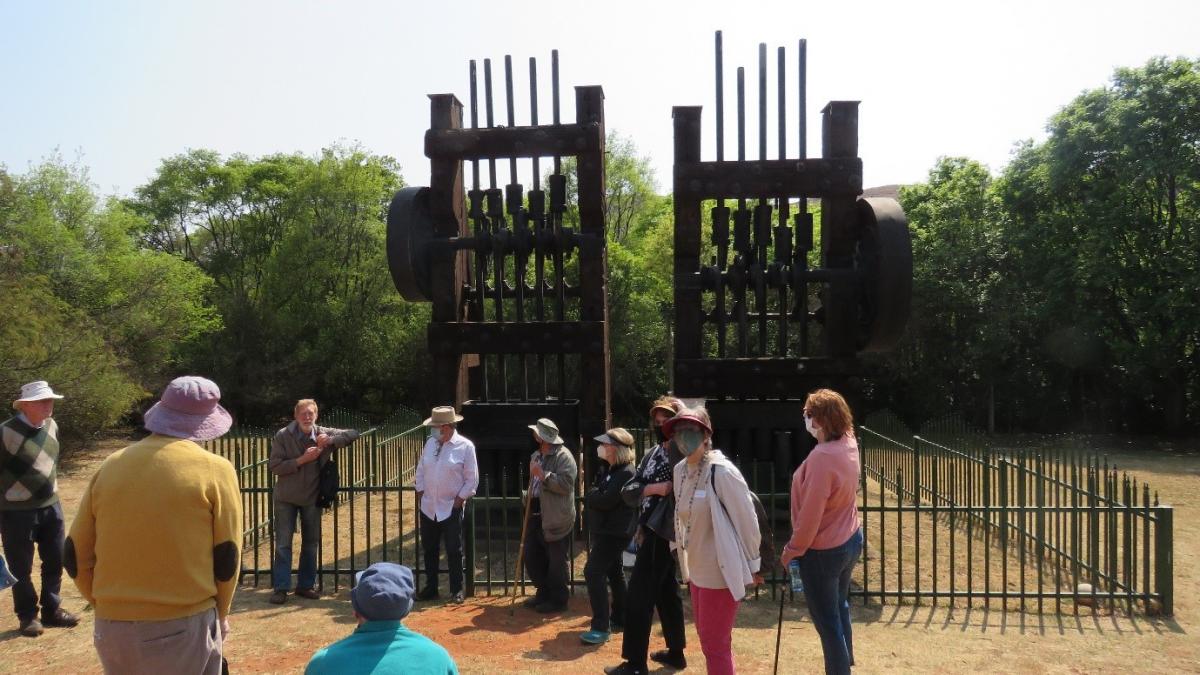 Rod Kruger, at the Struben Stamp Mill on the left, explaining how first the Confidence Reef and shortly afterwards the Main Reef were discovered.

Our first stop was at the stamp mill imported by the Strubens, now situated near the picnic area, where our knowledgeable and enthusiast guide, Rod Kruger explained the gold recoveries at the Confidence Reef soon proved to be disappointingly small.

After the Main Reef was discovered in March 1886, the Strubens played a major role in the subsequent development of the Crown Reef Gold Mine and Knight’s Mine near present day Germiston.

Johannesburg owes its origin to the gold bearing conglomerates of the Witwatersrand Basin a vast accumulation of ancient sedimentary rocks, more than 7000 meters thick, that has yielded almost half of the gold ever mined. The sedimentary rocks, including the gold-bearing conglomerates in the upper sequence of the Witwatersrand rocks, were deposited between 3000 and 2700 million years ago in a fluvial and shallow marine environment, by rivers that flowed into the basin from highlands to the north and north-west. Because of the Vredefort meteorite impact most of the rocks are buried beneath younger rock formations and the Main Reef dips below the surface at an angle of about 35º. The central part of this ‘golden arc’, that represents the shoreline of the ancient sea, is now referred to as the Rand.

In December 1885, two prospectors, George Harrison, and George Walker on their way to Barberton arrived at the Strubens’ mine looking for work. Walker was employed to work on the mill and Harrison was directed to the farm Langlaagte, where he was taken on as a builder. It seems at some stage Walker recognised some of the rocks and boulders that Harrison was using for building as gold bearing conglomerate, similar to the rocks he had seen being crushed at Wilgespruit. Harrison showed him the outcrop from which the rocks had come and upon crushing and panning some of the pebbles, they revealed a rich tail of gold.

In July 1886 Harrison visited President Kruger and made an affidavit that he had discovered gold on Oosthuizen’s farm Langlaagte. On 8 September 1886 nine farms on the Central Rand, extending from Driefontein in the east to Roodepoort in the west were declared public diggings.

The outcrop of the Main Reef that George Harrison discovered at Langlaagte eventually developed into the Crown Mines, one of world’s largest and richest gold mines. This mine closed in 1977, but one of its shafts can be visited at Gold Reef City.

As the shafts of the gold mines deepened the miners encountered an unexpected problem; the gold was intermingled with pyrite and the traditional method of extracting the gold with mercury proved unsuccessful. For a short it seemed the gold mines were doomed but in 1890 the MacArthur-Forrest cyanidation process successfully overcame the problems of treating the refractory ore from deeper levels.

After Rod’s preliminary talk we headed uphill towards the Strubens’ Mine while passing large rocks with accompanying plaques placed there by the Rotary Club. Each one represented a planet in our planetary system and indicating the relative distances. 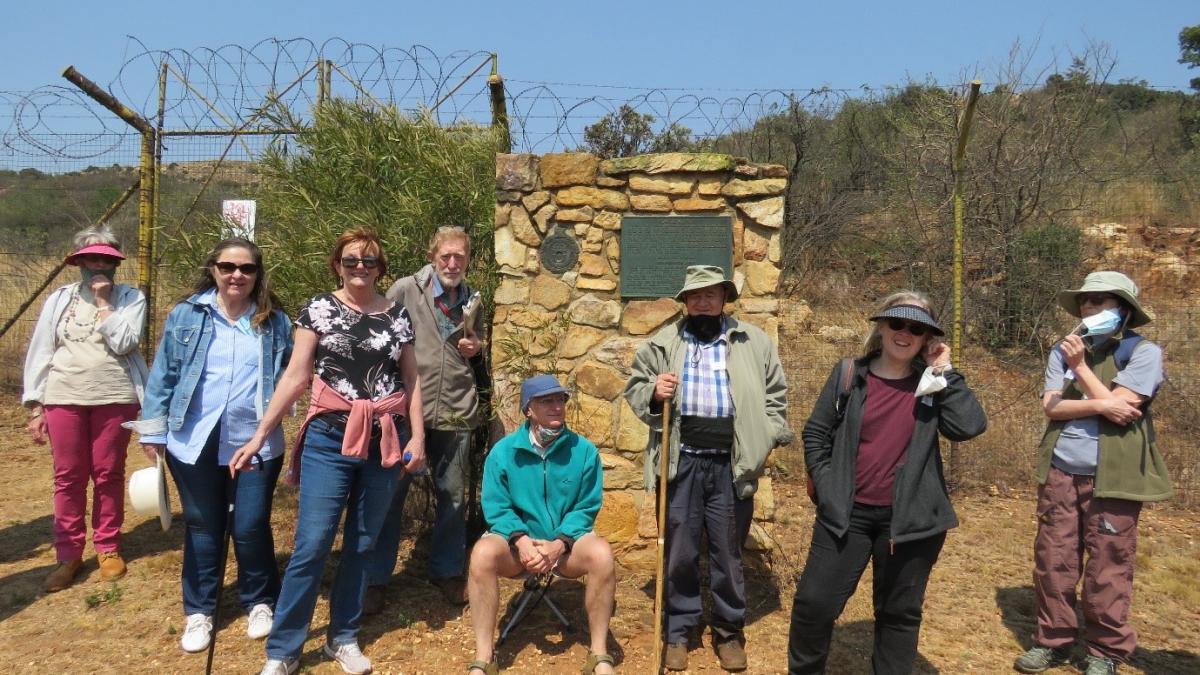 Some of our group about to enter the fenced off area of the Strubens’ Mine.

Upon entering the fenced off area and moving towards the Strubens’ mine we noticed some crushed rocks spread out just below the shafts. This was residue rock from the Strubens’ stamp milling process. 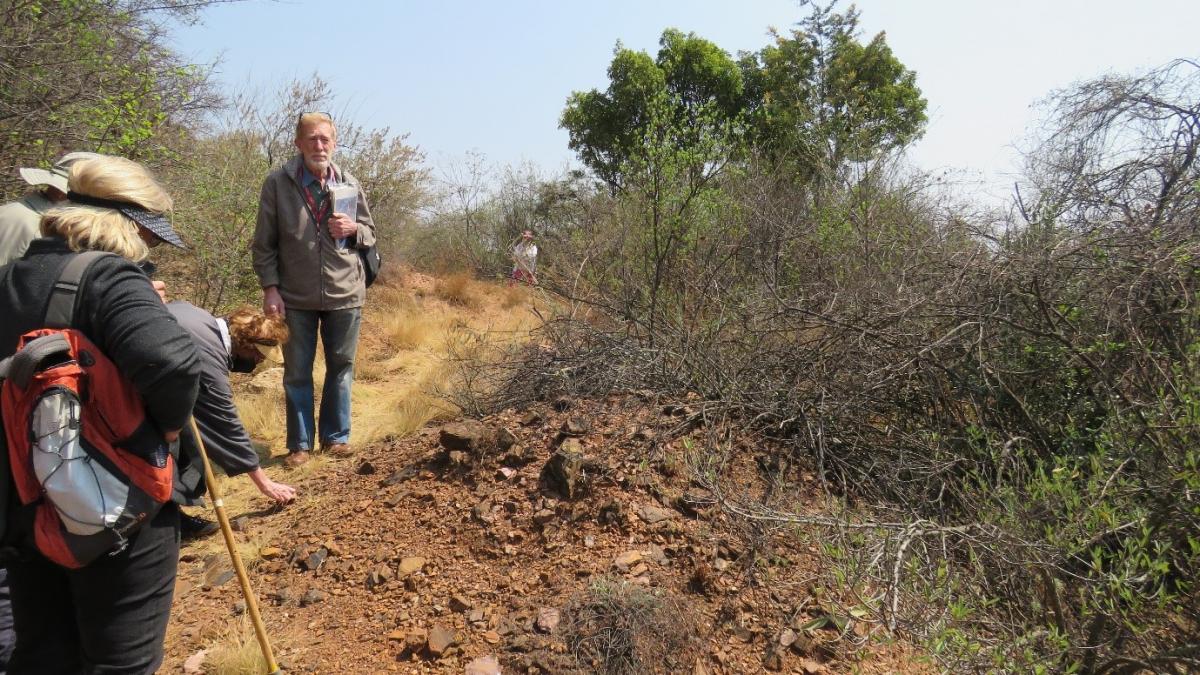 We then entered the Strubens’ mine. Strange to think this was one of the first mines on the fabled Golden Rand. 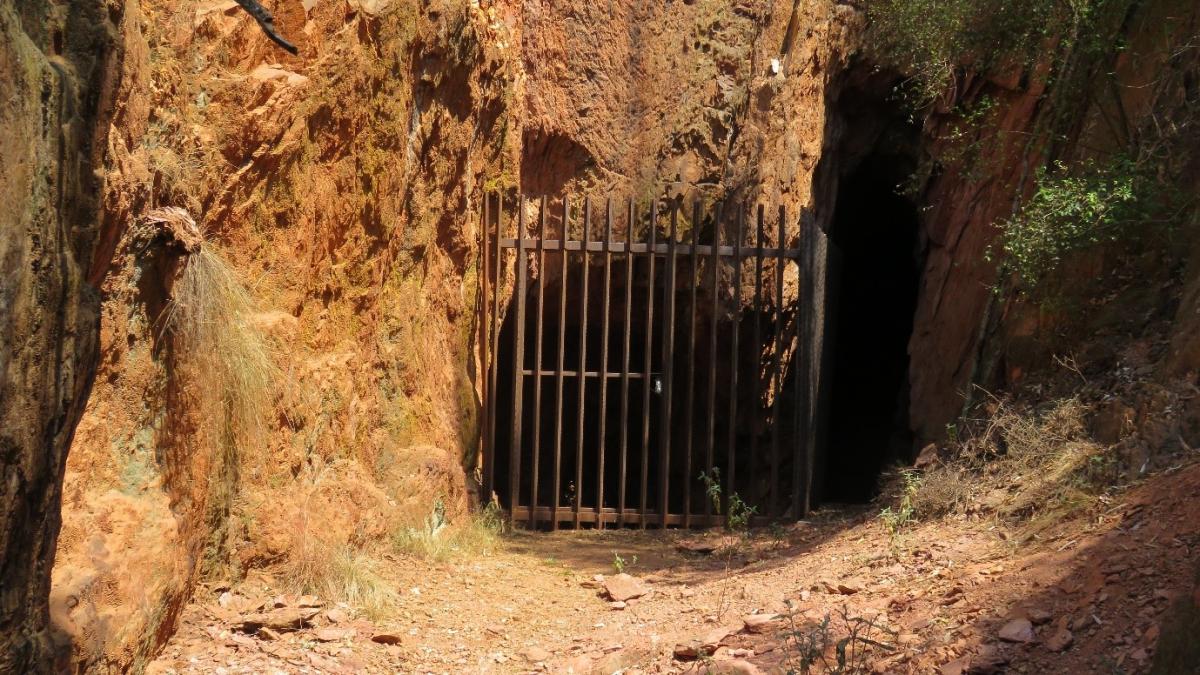 Gated entrance to one of the shafts. We entered the tunnel to the right of the gate.

We observed some remains of the supports that had been affixed to the side of the shafts which supported the ropes by which the miners were lowered into the depths of the mine. There were some ventilation shafts for the miners and the only light underground would have been provided by candles. The rocky walls surrounding these entrances were a deep red colour which indicated the presence of iron.

Here we also observed the early tunnelling excavations must have been very laborious, made solely by hammer and chisel.

Prior to the railways, the stamp mills for the Johannesburg gold mines had to be conveyed by large ox wagons pulled by teams of up to 24 oxen. Many farmers supplemented their agricultural activities by providing transport for mining machinery to the Rand.

It is estimated that at some stage there were more than 5000 stamp mills operating on the Central Rand mines. The noise and dust must have been indescribable.

Many of the old and abandoned mines on the Rand are still illegally mined by ‘Zama Zamas’ (meaning trying-trying)’. These illegal miners enter through unsafe and derelict mineshafts to dig for gold and in some cases undermine the pillars that support the stopes, often with fatal results. They often remain underground in poorly ventilated and dark areas, for weeks and sometimes months on end. Think of them next time you complain of your job! The ore, containing the gold is carried to the surface by helpers where it is crushed, and the collected gold is illegally shipped via Mozambique to India.

The Struben family will always be remembered for their part in the early mining days. The Struben Valley is named after them and many descendants of the original mining pioneers still live in Cape Town. Edith, an artist, and philanthropist lived in a house called Lymkote which is on the slopes of Table Mountain. One of the family mansions was called Strubenheim and is now part of the School of Music at the University of Cape Town.

After the tour all 16 of us gathered for our picnic lunch and felt warmed by reconnecting with old friends after the long Covid lockdown. While we didn’t see all the ‘local inhabitants such as dassies and small deer we did see our famous eagle soaring overhead chased by some crows. Kloofendal is a lovely place – stricken now by its rain starved ground it is none the less full of lovely flora and fauna and surrounded by interesting rock formations. Unfortunately, we didn’t visit the museum as it was being used by the IEC to register for voter registration, but we did enjoy the picnic spot. A happy day for everyone – ranging in ages from nine to nearly ninety!