Reserve for an outing in the southern part of the reserve. Situated between the suburbs of Mondeor and Kibler Park, 17 km south of the Johannesburg city centre, the reserve comprises 680 hectares of open veld and bush-covered ridges, bisected by the Bloubos Spruit. This jewel of the south provides a valuable reminder of how the area now covered by Johannesburg may have appeared before the discovery of gold. Free entry, together with safe parking and a picnic area with sparkling clean toilet facilities, ensure the reserve’s popularity with day hikers and trail runners. 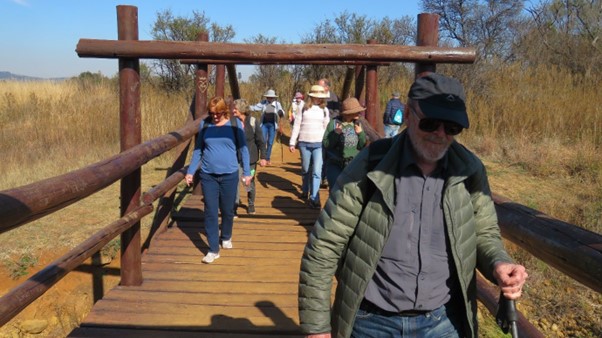 Shortly after crossing the sturdy log bridge near the entrance to the reserve we were delighted to see a majestic Black Sparrow Hawk (Accipiter melanoleucus) soaring the skies above us.

Stone-walled structures of the highveld

A short distance into the reserve, our first stop was at the replica of a Tswana homestead where Jill Weintroub spoke about the stone-walled structures that dotted the highveld in the past. Stone walling was a feature of much of the sub-continent, with clusters also found along the west coast from Port Nolloth northwards to what is now the Namibia/Angola border. In Namibia, a dense agglomeration is positioned on the coast adjacent to the Brandberg.

While many people are aware of the stone-walled ruins around Velorenkloof/Badfontein in Mpumalanga, and at Great Zimbabwe, we are perhaps not as familiar with the extensive stone-walled complex on the western slopes of the Suikerbosrand south of Johannesburg. It has only recently been described in detail in archaeological research. This complex, named Kweneng, has come to our knowledge largely through the work of Wits Professor Karim Sadr. He revealed his findings in 2019, evoking international interest in the ‘discovery’ of what was called a ‘lost city’, with coverage in the New York Post among other media. 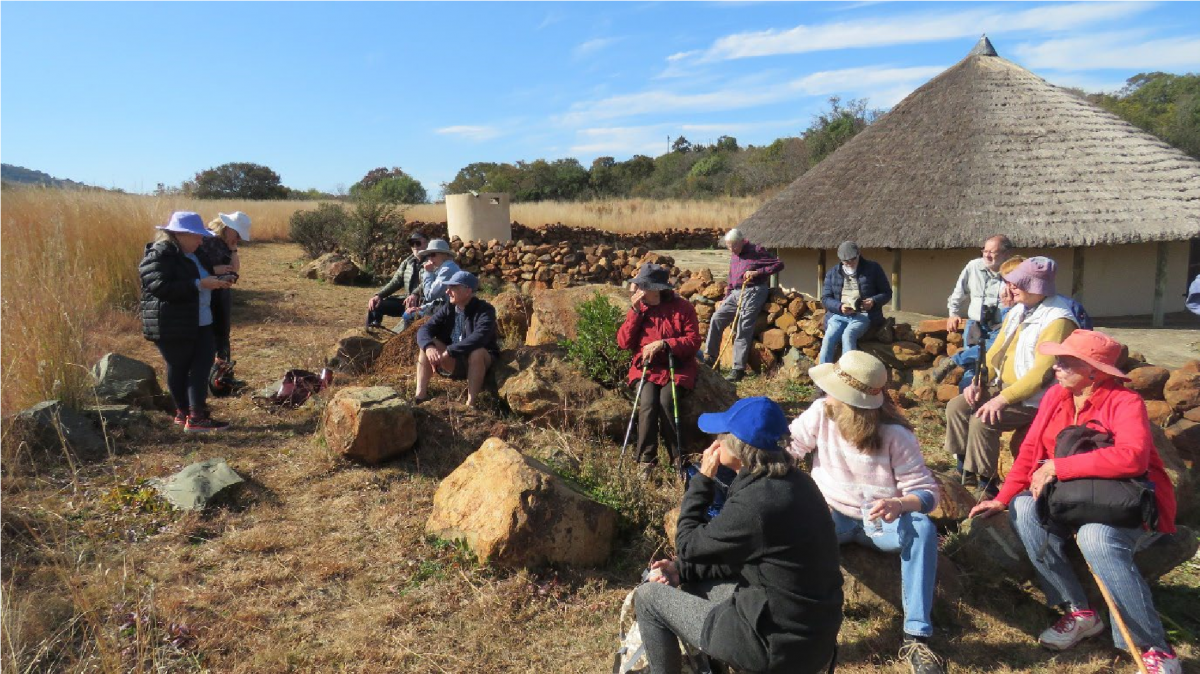 Jill Weintroub talks to members at the replica of a Tswana homestead in the Klipriviersberg reserve
Photo SJ de Klerk.

Sadr’s research in the Suikerbosrand area is part of a wider project, called Southern Gauteng SWS (stone-walled structures). His findings have led to a re-interpretation of earlier understandings of these structures. His discussion of the rise of city states on the highveld is in many ways a break from archaeological methods that relied on older stereotypical notions of ‘tribal’ histories. His research also upends the myth of the ‘empty’ land, a shibboleth of South African history under colonialism and apartheid. Sadr talks of a ‘grassland rush’ to the highveld between the 15th and 17th centuries, when there was a surge in the importance of cattle pastoralism among farming groups in southern Africa. This was accompanied by a boom in the construction of dry-laid, stone-walled settlements. Tens

of thousands of ruins are visible on aerial imagery of the highveld. In places their concentration reaches urban proportions.

Earth), to scan these landscapes. After digital modification, the vegetation and other visual ‘noise’ can be stripped out of the scans to reveal the stone-walled remains spread across southern Gauteng between Johannesburg and the Vaal River. This revealed what Sadr argues is evidence of an urban concentration along the western slopes of the Suikerbosrand.

He called it Kweneng after consultation with descendants of the Molokwane branch of the Tswana people who were thought to have lived there when the city was at its height between 1750 and the 1820s. Sadr has identified 900 compounds in it. The stone-walled remains located within the Klipriviersberg reserve were likely part of a satellite settlement in the orbit of Kweneng, or alternatively seasonal outposts.

Beyond the ‘billiard ball’ view of African history

From the archaeology of stone walling, we turned to historians’ ways of looking at the past. John Wright used the ‘billiard ball’ as an analogue to interrogate older views that understood the African past in terms of bounded groups called ‘tribes’ bouncing off one another on the landscape. Wright reminded us that this view was developed by colonial writers in the 19th century. It survived in academic accounts into the 1960s, and still remains influential in popular writings in English.

‘Tribe’ is a useful word to describe the kinds of African societies that came into existence during the colonial period, or, to put it more strongly, were forced into existence by colonial governments. Colonial administrators aimed to place Africans under their rule into convenient administrative units – units under supposedly ‘traditional’ chiefs, in defined territories, ruling through supposedly customary law, which in practice turned out to be law shaped by colonial governments. But the societies that Africans lived in before the 19th century were different. They were not ‘tribes’. They were fluid in their constitution. Rulers exercised less power. People were able to move about freely. They did not live in clearly defined territories. People under any one ruler did not necessarily share the same language and culture. With people able to move about, it meant that rulers had people of different languages and cultures under their authority. The groups they ruled did not have a homogeneous ‘tribal culture’.

Politics was not about the chief laying down the law, as in colonial ‘tribes’. It was about established groups and groups of newcomers constantly negotiating and navigating ways of living together, not out of any particular love for one another but because it was a political necessity. And if you didn’t like the set-up, you voted with your feet – you moved away. As anthropologists have long recognised, this was often an effective check on the arbitrary exercise of power by leaders. The most useful term that these historians have found to refer to organisations of this kind is simply ‘political formations’.

The notion ‘chief’ is equally troublesome. It carries with it ideas about African leaders that became established and entrenched in the colonial period – the idea that chiefs ruled by hereditary right, that they had authoritarian powers over their adherents, that they ruled over fixed territories, and according to fixed customs. This is very much how colonial administrators liked to see Shaka’s rule of the Zulu kingdom, and, by extrapolation, African systems of government in general.

But the historical evidence shows that a more fluid situation existed before 1800. It was characterised by regular contestations over succession; by conflicts between rulers and their adherents over the exercise of power; by the absence of clear borders between political formations; by continuing debates among the elders, including senior women, about what proper custom was, as seen by the ancestors. In place of the term ‘chief’, historians are beginning to use less loaded terms like ‘ruler’ and ‘leader’.

‘Oral tradition’ is another problematic term in the study of African societies before the colonial period. The popular and unquestioning understanding of this term is that it implies the handing down of a more or less fixed body of knowledge about the past from one generation to the next, to the point where it is finally formalised and written down. 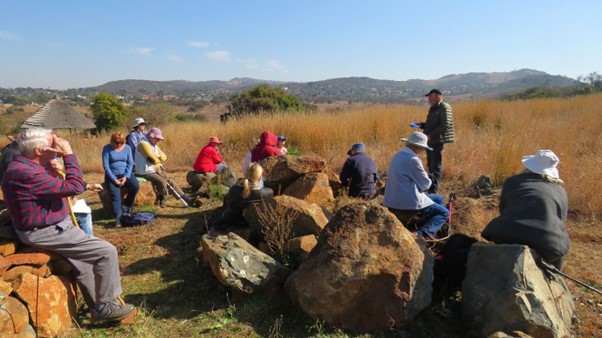 However, many of the documented oral accounts of the past before colonial times were not about ‘traditions’ of this kind. These accounts were in large part the products of conversations between the writer and speakers who were making statements about the past because it was important for making political arguments in the present. These speakers had particular interests to promote and defend in the present. Their knowledge of the past came from statements that they had heard from older people who in turn had had their own particular interests to promote and defend. Scholars today who use recorded oral accounts as sources of historical evidence focus on understanding the interests that gave them shape, and getting beyond the colonial view that sees them as fixed ‘traditions’.

Voortrekkers on the highveld

A walk down the hill from the Tswana replica took us to the 19th century and the material remains of the homestead where Sarel Marais, an early trek pioneer, and his family settled around 1850. Here, our third speaker and Northern Branch chair SJ de Klerk provided an overview of how the early Voortrekkers came to live on the highveld.

When the so-called Groot Trek began in 1836, some white ‘trekboere’ (mobile stock farmers) were already present in what is now the southern Free State. Many of the Voortrekkers trekked from the Graaff Reinet area. To obtain water for themselves, their draught oxen and accompanying livestock, they travelled along rivers and streams, such as the Seekoei River, originating west of Middelburg and coursing in a north-easterly direction to flow into the Vanderkloof Dam. Once across what is now the Free State and into the old  Transvaal, these Voortrekkers spread out to peg out farms for themselves. Some parties travelled west towards Potchefstroom (established 1838) and Rustenburg (1851), north towards Pretoria (1855), or east along the Suikerbosrand and Klipriviersberg. In the Suikerbosrand Nature Reserve, the homestead of the Diepkloof farm built in 1850 by Jan Gabriel Marais is still extant. These early pioneers would have staked out a farm of a size equal to an hour’s journey across on horseback. 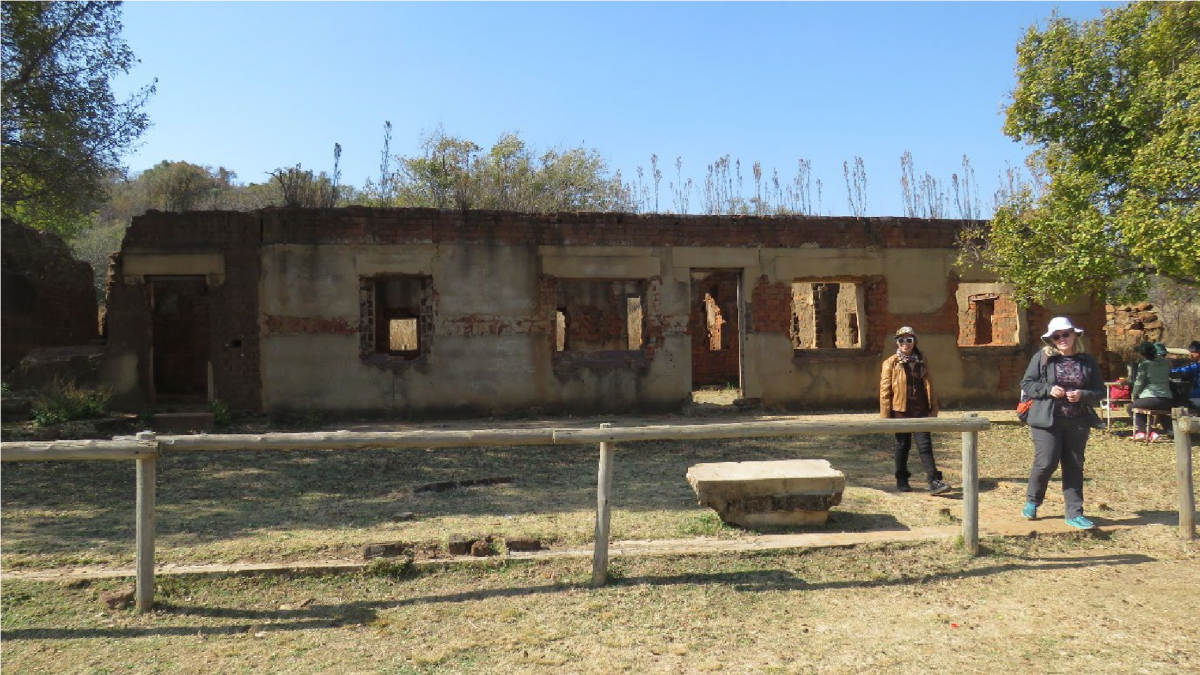 This area was not empty of African people as later Afrikaner historians often liked to claim. A clash between the Voortrekkers and the Ndebele under Mzilikazi occurred on the banks of the Vaal River and a small group of Voortrekkers, known as the Liebenberg Trek, was wiped out in 1836 just north of present-day Parys. After repeated clashes between the Voortrekkers and the Ndebele, the latter gradually migrated further north, eventually settling in what is now Southern Zimbabwe. Not all the African people previously subordinated by the Ndebele necessarily joined in this migration and many remained behind, eventually working on the Voortrekker farms.

Sarel Marais clearly had a good eye for well-watered land in a lush valley, protected from adverse winds and weather by the surrounding Kliprivier hills. It appears he and/or his son constructed the five elements that characterised a typical 1850s pioneer farmstead – farmhouse, waenhuis, orchard, irrigation furrow and family cemetery.

The Marais house originally had a thatch roof, but after burning down in 1947 it was replaced with corrugated iron. Another fire in the 1980s further damaged the structure, and there are fears that the mud brick walls, now totally exposed to the elements, may soon collapse unless urgent remedial action is taken.

En route to the farmstead, we passed the family cemetery, which we were able to view from a distance. Here Sarel Marais was buried in 1897 after his death at age 83. Apparently some of the older historical tombstones have been removed for safekeeping.

Jakob Marais inherited the farm upon the death of his father. Situated as it was so close to the burgeoning city of Johannesburg, it was well placed for profitable farming. Since Jakob Marais had no sons to take over from him, the farm was sold to the Quilliam family in 1917.  The Quilliam family further developed the farm, introducing a dairy and piggery, as well as growing lucerne, barley, mealies, and varieties of fruit. 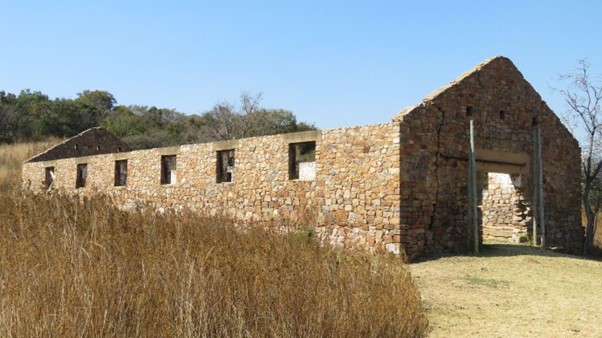 The Johannesburg City Council purchased the farm in 1950 after most of the Quilliam family had left and grandfather Quilliam had died. It was proclaimed as a reserve in 1984. The toilet facilities, bridge, parking lot, offices, tearoom, and some of the hiking paths were constructed and laid out during the last two decades or so.

The outing ended back at the entrance, where we enjoyed a picnic luncheon on a surprisingly pleasant winter afternoon.