Raymond Dart’s contributions to the field of palaeoanthropology cannot be overstated. Not only did his 1924 discovery of the Taung child (Australopithecus africanus) verify Darwin’s prediction that Africa was the birthplace of humanity, but by the mid twentieth century he had also developed an influential hypothesis of early hominid behaviour. The ‘killer ape’ hypothesis, popularised in Robert Ardrey’s book ‘African Genesis’, contended that an inherent violence in early hominids propelled the evolution of our lineage. This could explain why we as humans are so violent; this being a human trait, whether perpetrated as an affective or predatory aggression.  These ideas provoked Bob Brain into testing this hypothesis at the Paranthropus robustus and Homo erectus site of Swartkrans. Brain’s studies falsified Dart’s imaginative hypothesis of violent

australopithecines. Nevertheless, human combative behaviour evolved from different survival needs as both a group-social and as a hunting animal. Here, combative behaviour is explored from early hunter-gatherer conflict, to the advent of large scale warfare, martial arts traditions and recreational combat sports. 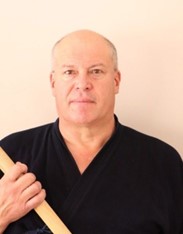 As a result of having studied Chinese, Filipino, Okinawan and Japanese martial arts over the past 43 years, he has developed an interest in hoplology: the study of human combative behaviour and performance.