In her presentation at Roedean School to the Northern branch of the Archaeological Society, Professor Sarah Wurz introduced us to a new expression, ‘coastal adaptation’. This refers to the ways in which, over the last 200 000 years, humans made use of the resources of the seashore’s inter-tidal zone - shellfish, fish and birds. Both modern humans and Neanderthal people benefited from the abundance of this resource, which was both dense and predictable. Molluscs and muscles, limpets and lobsters, not to mention the occasional periwinkle, all combined to provide a beneficial diet. Today we are able to identify these marine resources as being high in protein, fatty acids and omega 3. This poses a tantalising question. Did coastal dwellers have a diet that gave them an evolutionary advantage over their up-country cousins in cognitive ability and the development of symbolic behaviour during the early Middle Stone Age around 100 000 years ago?

At various stages in the distant past the seashore was not where we see it today. Six thousand years ago the sea was an average of three metres deeper than it is today. In the last glacial period, commonly called the last Ice Age, between 100 000 years ago and 25 000 years ago, the seashore was in retreat. In places on the southern coast of southern Africa, the shoreline was at the edge of the continental shelf, 100 km from today’s sea cliffs. At Klasies River the shoreline was much closer, being about only four kilometres from today’s cave system. These swings in both climate

and shoreline position would have had an influence on the diet of early humans as the availability of fauna changed in both type and abundance. 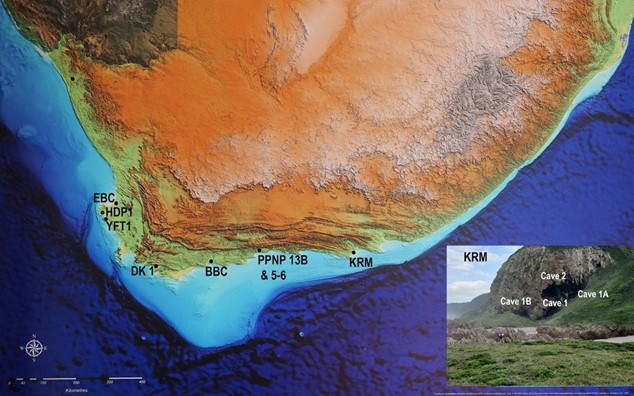 Recently archaeologists have compared items that seem to indicate symbolic behaviour discovered in the deposits at the three main shoreline archaeological sites. Professor Wurz showed us an illustration of an eland’s rib bone with a serrated edge. Close examination suggests that this was a tool used for cutting plant material. Evidence from core samples indicates that between 100 000 and 110 000 years ago the earth moved into a wet phase. In the same period there appears to have been a blossoming of symbolic behaviour worldwide. Are the two developments linked, and did coastal dwellers develop cognitive skills ahead of modern humans living on the high savannah?  The truth of the matter is that at present we don’t know. It is a case of ‘work continuing’.